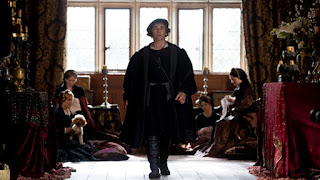 A change of genre, then: this blog is primarily devoted to reviewing old episodes of science fiction and fantasy television, and a few exceptions aside - The West Wing, for one - I have kept much of my non-SF viewing off the website. Having just started the BBC's six-part miniseries Wolf Hall, however, and being enormous impressed with its first episode, I figured it was well worth expanding the remit and giving this exceptional drama a closer examination.

It is 1529. England's King Henry VIII (Damian Lewis) demands an annulment from his Queen Catherine of Aragon, as she has failed to produce him an heir. The King's once-trusted advisor and confidante Cardinal Wolsey (Jonathan Pryce) has failed to draw this annulment from Rome and has been exiled from court. Wolsey's doggedly loyal lawyer Thomas Cromwell (Mark Rylance) continues to fight for his master's cause despite vicious opposition in the English court.

Peter Straughan's script, which adapts the first two novels of a trilogy by Hilary Mantel, is a mixture of the very good and the slightly frustrating: good because he manages to introduce an extensive and complex cast of characters in a clear and very understandable fashion, good because his dialogue is so well composed and engaging, and frustrating because a non-linear storyline packed with flashbacks occasionally gets a little confusing and difficult to follow. It does not ruin the episode by any stretch, but it is wise of any viewer not to take their eyes off the screen lest they overlook one of the regular captions informing precisely when in the eight years prior to Wolsey's downfall the scene is taking place.

The episode also has a strong and appealing visual aesthetic. Director Peter Kosminsky and director of photography Gavin Finney stage much of the indoor action by candlelight, which may make a few scenes maddeningly dark but which also gives the whole piece a striking authenticity. This is a view of Tutor England with more mud and grime than sex appeal, and as such stands very well against other recent adaptations of King Henry's life, including The Tudors and The Other Boleyn Sister. It is not an action-packed episode, yet it feels as if the threat of violence lurks around every corner.

Star Mark Rylance is exceptional as Cromwell. He is a quiet, persistent man, with a strong sense of duty and a melancholic, near-mournful expression. So much of what Rylance does here is subtle and understated, and it makes him a particularly fascinating and emotionally engaging lead. Jonathan Pryce gives a more overt and bold performance as Wolsey, something which befits his character rather well. He gives Wolsey warmth and depth, when he is all too often represented as a relatively simplistic character.

When Damian Lewis arrives as Henry VIII it is remarkably late into the episode, and almost without significant build-up or anticipation. It is not quite like Martin Sheen's legendary debut at the end of The West Wing's pilot, but rather something more unexpected and realistic. Lewis' performance here is brief, so it will likely take another episode to judge how his portrayal of the King fares.

This sort of production is exactly what the BBC is for: rich performances, beautiful production values, and a wonderfully evocative and dramatic script. It is a timely reminder of just how wonderful British television drama can be - and best of all there are five more episodes to come.
Posted by Grant at 9:00 AM