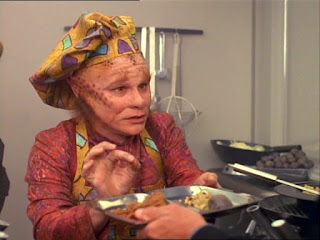 It is 6 February 1995 and time for another episode of Star Trek: Voyager.

While on an away mission Neelix (Ethan Phillips) is shot by an unknown assailant and has his lungs stolen. The Doctor (Robert Picardo) finds a way to keep Neelix alive, but unless his own lungs can be recovered he will be stuck immobile in sickbay for the rest of his life.

Many Star Trek fans continue to mock the genuinely awful original series episode "Spock's Brain". Only four episodes into its first season the makers of Star Trek: Voyager weirdly decided to give it a spiritual sequel in "Neelix's Lungs". If only they had used the title. Instead it is titled "Phage", and it is what is fast appearing to be a typical combination of an interesting idea matched with poor dialogue and generally weak characterisation. As per earlier episodes there are occasional glimmers of quality here and there - in this case they involve the Doctor - but they are insufficient to overcome the critical flaws dragging down the episode as a whole.

The episode's biggest problem is not the slightly silly science of it all - with no means to replicate such a complicated set of organs, the Doctor is forced to give Neelix holographic ones - but rather with Neelix himself. He is a dreadful character. He has been developed with a decidedly irritating personality. He is obnoxious, bizarrely unaware of how he intrudes upon the rest of the case, weirdly naive in pretty much all things and - in a new addition for this episode - fiercely jealous at the thought of anybody in the crew making a move on his girlfriend. On top of that the character is saddled with ugly costumes that make him look as if he is dressed in furniture upholstery and prosthetic make-up and hair that makes him look less like a Star Trek character and more like a 1980s cartoon cosplayer. The actor, Ethan Phillips, is a perfectly talented actor, but he is working with awful material. I think Neelix may be my least favourite Star Trek regular of all time.

There is obvious dramatic material in a story about a character who discovers she or he may never move again, but "Phage" essentially relies on the most trite and ordinary angles on it. What is worse, the time it spends focusing on Neelix's predicament takes time away from other, more interesting elements in the episode. For one thing the Doctor gets some welcome development as he continues to adjust to the idea of being around full-time - and indeed to accepting that he is a sentient intelligence with an ability to grow and learn. The episode forges a nice link between him as Kes (Jennifer Lien) that the series will build upon over the next few seasons. Some more time on this part of the episode would have helped it a great deal.

Another element that deserves more attention is the Vidiians. They are a species who have fallen victim to an infectious disease they call "the phage", and to survive most constantly replace their bodily organs and skin. They do this by effectively raiding random aliens for body parts: an epidermis here, Neelix's lungs there. They do not see this as something reprehensible to do, and there is a brief but powerful scene in which they are finally confronted by Captain Janeway and she does not know how to respond. It's too late to retrieve Neelix's lungs - one of the Vidiians is using them to breathe - and she has no authority to capture or punish them for it. It is scenes like this that make the episode particularly frustrating: there is evidence of a much more complex and interesting story to be told, but the route selected by the writers was the one packed with clichés and simple answers. When the lead Vidiian offers to use his advanced medical technology to transplant a donor lung into Neelix (Kes understandably volunteers) it feels like a quick fix to reach the closing titles rather than any kind of climax.

There is a visible and growing problem in these early episodes, in which there are clearly writers coming to Voyager with intriguing and often-times clever concepts for science fiction stories but which are getting adapted by a production team intent on making a fairly simple and non-challenging TV show for a mass audience. The problem arises when the former gets adapted for use in the latter. Better to stick with breezy, populist storylines than strangle the clever ideas as they are developed.

Four episodes into Season 1 and the quality ratio drops to 25 per cent. I really hope there is another good episode soon.
Posted by Grant at 9:15 AM