Tinker Tailor Soldier Spy: "How It All Fits Together" 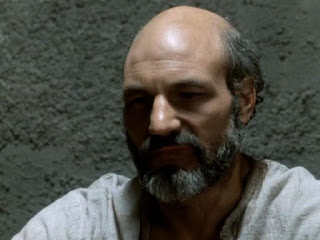 It is 1 October 1979 and time for the fourth episode of Tinker Tailor Soldier Spy.

Quillam (Michael Jayston) is forced to head back into the Circus to retrieve some documents, and finds himself directly questioned by Alleline (Michael Aldridge) about Ricki Tarr's whereabouts. Smiley (Alec Guinness) recalls his sole encounter in India with the mysterious Soviet spymaster Karla (Patrick Stewart).

Quillam's first venture into the Circus in episode 3 was an unexpectedly tense affair. This second trip, in which he attempts to physically steal an intelligence file from under MI6's noses, leaves it in the dust. This is the sort of sequence where the drab, smoke-stained realism of the series really pays off: in a heightened, Hollywood-style thriller it takes an awful lot to ratchet up audience tension. Here it is a much easier affair: these are realistic characters, and there will not be any gunfights, martial arts extravaganzas or explosive car chases. It is instead brutally simple: if Quillam is caught, he's in serious trouble with the authorities.

At one point it even seems that the game is up, but instead he has been apprehended so that Alleline and his senior staff can pressure him over Ricki Tarr's whereabouts. Throughout the scene it's inevitable that thoughts will turn to which man is the mole, but it is still much too difficult to tell. The heads of the Circus are all wonderfully distinctive, whether it's Roy's blunt grumbles, or Alleline's bluster, or particularly Haydon's strikingly inappropriate amusement.

With pressure on Quillam over Ricki Tarr's authenticity, it's back to Tarr for Smiley to question him further. Hywel Bennett is fantastic as Tarr, and does a great job of playing this increasingly desperate and wound-up runaway spy. Alec Guinness plays Smiley in a wonderfully calm fashion, even when a furious Tarr lashes out and tries to assault him. Guinness has such a beautiful voice and demeanour that there's pleasure simply in watching and listening to him in every scene he occupies - no matter what the subject matter.

In a flashback we see him as a younger man (still played by Guinness), on assignment to India to bring over a potential defector - the man who will become the mole's spymaster Karla. It is a phenomenal scene: Smiley is sweaty and a little fidgety, but tries to be pleasant and conversational. In the opposite chair, his legs still chained together, is Karla - played in total silence and with enormous menace by Patrick Stewart. It is a valuable scene for the episode to include, because while characters have discussed Karla we have never seen him. Now we have a face to apply to the story's ultimate villain.
Posted by Grant at 5:15 PM