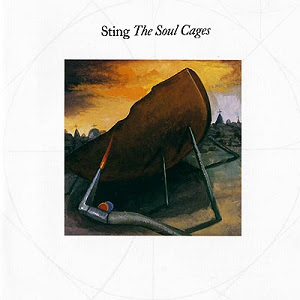 It always seems 'de rigueur' to mock Sting. Born Gordon Sumner, he rose to fame as the lead singer of the hugely popular British rock band the Police. After the band went on hiatus in 1984 he went on to record his first solo album, The Dream of the Blue Turtles. It was a massive hit both in the UK and internationally, and when the fractious relationship between his two Police band-mates finally collapsed he shifted into a full-time solo career.

I do not think it is a controversial claim to say that Sting is one of the UK's finest composers and lyricists. At the same time, and despite liking the vast majority of his work over the decades, I think it is fair to say he is an artist with a richly developed ego that often manifests as a tremendous self-importance. People generally do not appreciate hubris, and as a result Sting has left himself open for his entire solo career to scorn, ridicule and widespread dismissal.

Let us for the moment put aside the man's ego, however, and actually take a look at his work. His musical style is to my mind rather wonderful, combining at different points jazz, blues, rock, reggae and even classical music. His lyrics are more often than not stunningly good. I am a huge fan of his work, and of his 11 studio albums I think 1991's The Soul Cages is his absolute best.

Shortly after the release of Sting's second solo album, Nothing Like the Sun, his father died. The shock led to a crippling period of writer's block, and for several years he did not write any new songs. To break out of this situation he tackled it directly, and wrote an entire concept album about his father, his home town of Newcastle, and of the sea that his father loved so much. It's powerful stuff, featuring songs packed with autobiography and folklore, loss and sorrow, and ultimately a profound sense of resolution and peace. I suspect this is the album to which I have listened the most in my entire life. If pressed to name one favourite, this would almost certainly be it.

"Island of Souls" introduces a young man growing up in Newcastle who dreams of escaping from an expected life working in the city shipyards like his father. His dreams are interrupted by an industrial accident that fatally wounds his father. It is a slow, deeply mournful song that perfectly set up the overall tone of the album.

That said, the tone is immediately disrupted by "All This Time". This second track, pretty much the only viable single on the album, is surprisingly upbeat given that it is essentially about Billy's father receiving the last rites and dying from his injuries. I strongly suspect this song exists specifically to give The Soul Cages at least one commercially viable hit single. Viable it was, reaching #1 in the USA's Billboard charts. While the melody is upbeat and energetic, the lyrics are wonderfully bleak. There is a marvellous contrast between the two. One description in particular of a pair of priests 'fussing and flapping in priestly black like a murder of crows' has stuck with me every since the album was released.

"Mad About You" jumps from the story of Billy and his dead father to tell a Biblical story of King David and Bathsheba. It's a song with a relentless momentum: it is measured but feels unstoppable. It has a beautiful use of strings and a strongly East Mediterranean feel to it. You can feel a dark, passionate longing in the lyrics. It's another strong highlight for the album.

"Jeremiah Blues (Part I)" switches tones for an aggressive jazz number about what seems like pre-millennial angst: everybody partying as the world almost falls apart. Religion gets another mention as well ('The Pope claimed he'd been wrong in the past; it was a big surprise'). It is a good song, generally speaking, but it does feel like a slightly weak fit to the songs around it. Interestingly there has not to date been a "Jeremiah Blues (Part II)".

"Why Should I Cry For You" was the first song Sting wrote for the album, and remains its most powerful. It is a tremendously sad farewell to his father, with lyrics that are again packed with ocean and seafaring metaphors. It is my favourite song on the album. On the original vinyl and cassette tape release, this closed the first side. It feels like the theatrical climax of a first act as well.

If "Why Should I Cry for You" works as the Act 1 finale, then the instrumental "Saint Agnes and the Burning Train" works as an entr'acte for the second half. It is a delicate, emotive number that perfectly placed and very effective. The single of "All This Time" came with another instrumental track, "I Miss You Kate", on its b-side. It is a lovely companion piece to this, strong enough that it arguably should have been squeezed onto the album somewhere.

"The Wild, Wild Sea" sees Billy caught in a dream of heading out to sea, as his father had wanted to do. While caught on a ship in the storm he catches a glimpse of a sailor at the wheel - his own father. It is a slow, extremely haunting song that leads perfectly into "The Soul Cages" itself.

The title song adapts an old British folk tale, in which the King of the Sea keeps the souls of drowned sailors trapped in lobster pots beneath the ocean. To free a soul, one must challenge the King to a drinking game. While this is a straight adaptation of the original tale, it is impossible after the earlier songs not to imagine Billy drowning himself to challenge the King and free his own father. It gives the whole album a fantastical, folkloric climax, although as with the preceding song one presumes it is all a dream.

The Soul Cages concludes with "When the Angels Fall", a seven-and-a-half minute epic that calls to bring down the Christian church that so troubles Billy throughout the album. It is powerful and beautifully written, as is much of the album. 'Bring down the angels,' Sting sings. 'Cast them from my sight. I never want to see a million suns at midnight. Your hands are empty, the streets are empty. You can't control us, you can't control us any more.' There is a firm resolution here. Billy moves on, his father at peace, his disgust at the religion influence upon him resolved. One assumes the same was true of Sting himself.

The bottom line is that The Soul Cages is a remarkable artistic expression of the grieving process. Sometimes when an artist is forced to work through their emotional issues it creates rather self-serving art that benefits the artist without entertaining the audience. That is categorically not the case here. This is a beautiful, heartbreaking and mournful masterpiece. I never tire of listening to it.