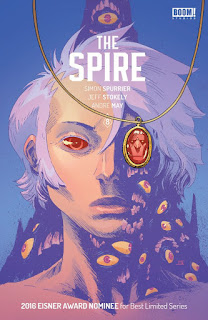 Simon Spurrier and Jeff Stokely's much-delayed conclusion to The Spire has finally hit comic store shelves. It is a great end to a fantastic series. Together they have created a rich and evocative world that is one part Metal Hurlant, one part Miyazaki and one part all of their own. The Spire has combined excellent character work with dramatic action and even a few elements of light horror. The world-building and design has been second-to-none.

The series has presented a murder mystery throughout its eight issues, one that gradually expanded to a whole conspiracy. When the answers finally come they are as unexpected as they are effective. It is a hugely dramatic and emotionally staggering finale. It wraps up what has been one of the best comic books of the past year or so: intelligently written, beautifully illustrated and very memorable.

The Spire #8. Boom Studios. Written by Simon Spurrier. Art by Jeff Stokely. Colours by Andre May.

Under the cut: reviews of Batman, Descender and Joyride.

A terrorist attack on an airliner sets up one of the more jaw-dropping and ridiculous Batman action scenes I've ever read. I am still not certain whether it was genuinely entertaining, or just amusing because it was so silly. It's a scene that takes up the bulk of this first issue as well, leaving just enough room for a cliffhanger ending. The dialogue is strong - this is Tom King's first solo issue - and the art is solid but not quite working for me. Snyder, Capullo and Miki left a pretty high bar behind when they left Batman. This issue does not quite manage it to my satisfaction. (3/5)

Descender is back following a three month break, providing an effective and rather miserable flashback to the origins of Tim-22 and the events that transformed him from a helpful service android into a homicidal maniac. It's a strong issue as a result, packing an emotional wallop as well as setting up this next story arc. Dustin Nguyen's artwork, which sometimes works with this comic and sometimes doesn't, seems to fit in perfectly this month. This is a dark, emotional and very slightly heartbreaking issue. (4/5)

At the end of the last issue the runaways' spaceship had run out of power just inside an interstellar quarantine zone. When Uma and Catrin attempt to make repairs from the outside, they are thrown off the ship's hull and start tumbling down towards a nearby planet. With minutes to go, the others inside the spaceship debate an artificial intelligence on whether or not they may go to Uma and Catrin's rescue. This is a solid issue, not quite as well developed as the previous two, that provides some neat science fiction in tandem with engaging dialogue and character work. While I enjoyed the issue, I am unsure of how this storyline is going to be wrapped up in next month's fourth and final issue. It has all felt a little too brief and episodic for that to properly work. I can see a sudden extension on the horizon - or a rapidly developed sequel. Quite frankly Joyride deserves either. It's great. (4/5)
Posted by Grant at 5:09 PM