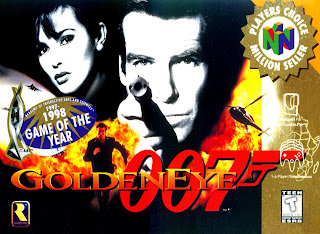 GoldenEye 007 is a remarkable game. For one thing it is a licensed title based on a feature film, and it does not suck. Even today, almost 20 years later, that is a rarity. For another thing it revolutionised the first-person shooter in multiple ways, making it not only a great game but a historically important one as well. Finally it was for many players - myself included - the best party game that the Nintendo 64 had. While four-player GoldenEye matches were generally an excuse for me to repeatedly get beaten by my much more talented friends, those matches remain some of my most fondly remembered gaming experiences. This is a legendary game.

Prior to GoldenEye's release it was assumed that first-person shooters could not be effectively produced for a games console. They were almost exclusively the preserve of the computer, where players could control the game using a combination of a keyboard and a mouse. GoldenEye proved that, with sufficient forethought and clever design, the FPS genre could be translated very effectively to the console. It kicked off a run of excellent shooters that continues to this day.

Even more impressively, the game added more complex tasks and gameplay than one usually found in a FPS title. It was not simply a matter of getting from the beginning of a level to the end, there was a range of secondary tasks for the player to achieve. These tasks included collecting hidden objects and escorting non-player characters (NPCs) through the level to safety. There was an element of stealth to the game as well, which made it feel even more fresh and distinctive.

All of this was produced by a core team of 12 programmers and artists, many of whom had never made a videogame before. Its much-loved four-player "versus" mode, which allowed four players to simultaneously run around modified maps shooting each other, was added by one programmer quite close to the end of development - and essentially as an afterthought. It is a brilliantly addictive and competitive gaming mode that was a highlight of many mid-to-late 1990s gaming parties.

GoldenEye did an excellent job of tracking the narrative of its namesake. It retained all of the major story and action beats of Martin Campbell's 1995 film, but freely stepped beyond them when it better suited the gameplay. While there had been James Bond tie-in games produced before, they had not been commercially successful. GoldenEye sold eight million copies, making it the third highest-selling game for the Nintendo 64 and transforming James Bond into a solid-gold videogaming franchise. So successful was this title that when the studio that produced it (Rare) went to license the sequel Tomorrow Never Dies, they could not afford EON Productions' licensing fee. It was instead purchased at great cost by Electronic Arts.

Rare developed a wide range of games for Nintendo and later Microsoft, but in all honesty they never topped what they achieved with this one remarkable game. In 2005 its prestige was still great enough for EA to release the largely unrelated GoldenEye: Rogue Agent to cash in on its success. In 2010 Activision purchased the rights and released a modified high-definition remake of GoldenEye featuring Daniel Craig as Bond. This is not simply one of the best Nintendo 64 games. It is one of the best first-person shooters ever made.
Posted by Grant at 7:35 AM