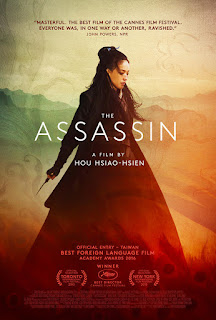 Yinniang (Shu Qi) was taken from her home at the age of ten and trained to become a master assassin. Now an adult, she fails to undertake her latest mission when she sees her target cradling his infant son. As penance she is ordered to the distant province of Weibo to kill its chief minister Tang Ji'an (Chang Chen) - a man to whom she was once betrothed.

Every few years a wuxia film breaks out internationally and becomes a critics' darling across Europe and North America. It started with Crouching Tiger Hidden Dragon in 2000, which was soon followed by the likes of The House of Flying Daggers, Hero and The Curse of the Golden Flower. Hou Hsiao-Hsien's The Assassin is the latest such acclaimed film, having been awarded Best Director at the 2015 Cannes Film Festival. It is also the first new feature film from Hou in eight years, which has led to much pent-up demand for new work from one of Taiwan's most beloved directors.

The Assassin is an excellent film but, I suspect, a divisive one. Certainly anybody tempted in its direction by the promise of another Crouching Tiger is going to walk away deeply disappointed. It approaches the wuxia genre on its own terms, and tells its story in its own way.

For one thing it appears to wilfully defy traditional elements of the genre. Scenes of martial artists and swordplay are sparsely distributed and surprisingly brief. They are shot without much in the way of elaborate camera angles; some are even choreographed in such a way that the sword-fighting is partially obscured and seen from a distance. Much of the film is populated with long, slow-paced conversations with meaningful pauses and an odd hesitant quality. One scene aside, the film is shot in an old-fashioned 'Academy' ratio (4:3, like a 20th century television). Hou favours static and panning shots over tracking, which only adds to the old-fashioned feel.

The narrative is simple, but its back story is complex, and Hou does not give the audience too many handles with which to grab onto the characters and work out precisely what is happening. This 'sink or swim' attitude is one of the key elements bound to divide viewers. I suspect the viewer's enjoyment of the film will depend an awful lot on how much patience that viewer has for being slightly confused for long periods of time.

Visually the film is stunning, with beautiful costuming and richly coloured sets. Exterior scenes showcase a remarkably surreal silver forest, as well as the sort of lush, steep, mist-covered hills one sees in traditional Chinese landscape paintings. Lim Giong's musical score is incredibly restrained, and gives the film an eerie sense of menace and dislocation.

If there is another wuxia film that The Assassin most resembles, I would argue it is Ashes of Time. That surreal, deliberately obtuse film by Hong Kong's Wong Kar-wai was a legendary box office disaster back in 1994, with audiences queuing around the block for refunds. It shares so many features with The Assassin, however, including the visual aesthetic, the comparative lack of action, the confusing storyline and the unapologetically obtuse characters. It is a sign of how far critics and general audiences have progressed over the past two decades that Ashes of Time was reviled yet The Assassin has received widespread praise.

Shu Qi gives a strong, near-silent performance as Yinniang. I have always liked Shu's performances, but she is often a slave to poor screenplays. Her acting here showcases an ability that extends well beyond the twee romances and comedies in which she usually appears. She has a deeply unsettling presence here, often revealed in the rafters and dark corners several minutes into other characters' conversations in those same rooms. For much of the film she lurks like this, with occasional skirmishes to ensure Tang knows she is there, until she finally makes her choice of whether to murder him or not.

Ultimately The Assassin is most wonderful and frustrating in equal measure. It is a challenging film, but I believe it is important for a film viewer to be challenged from time to time. This is hands-down one of the best opportunities for that in recent years. It does not just visit a genre; it stretches it.
Posted by Grant at 5:06 PM