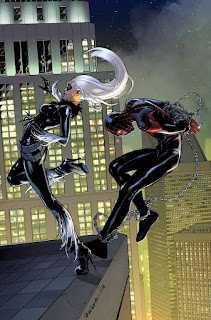 Let's talk about Spider-Man. Since its relaunch five issues ago it has focused on Miles Morales, who was the Spider-Man of Marvel's Ultimate Universe before they destroyed it as part of their Secret War event. I have a lot of affection for Miles. He is distinctive, goodhearted, fallible and constantly out of his depth. He's been written by Brian Michael Bendis ever since Bendis created the character, and he has benefited enormously from Bendis' keen ear for dialogue and characterisation. Miles has also received some outstanding artwork as well, with this current run being illustrated by Ultimate Spider-Man favourite Sara Pichelli.

Miles Morales has a problem though, and it is a problem shared by many of his Marvel Comics stablemates. It is event miniseries. They come along every few months, and the majority of Marvel's titles slavishly tie into them, and they throw up, switch and change around the status quo every time. More often than not they lead to half of the regular monthlies being cancelled and replaced with new editions. It's incredibly frustrating, because it not only interrupts the momentum of books like Spider-Man it often closes off intriguing story possibilities. Comic books are fighting a constant war of attrition: new titles are published every week, and old titles as a rule lose readers every month. On the one hand constantly rejigging and relaunching books seems like a smart idea, because it is constantly giving new readers an opportunity to jump onboard. At the same time it is also giving existing readers constantly excuses to jump off. This sense of what I'll call "volume fatigue" has already led to me dropping Thor. I'll probably catch up some day via collected editions. I'm pretty close to dropping Spider-Man as well, because while this issue was entertaining - Black Cat has Miles kidnapped, while Ganke further befriends the X-Men's Goldball - it ends with a proud announcement that next issue drops everything to tie into Civil War II.

I read superhero comics because I adore serialised storytelling. The more Marvel disrupts and interferes with that serial narrative, the less engaged with the book I become. It's a shame. This is a really entertaining book when Marvel aren't interrupting it. (4/5)

Aphra unwillingly returns to face Vader's wrath, but Vader is a little tied up fighting a cybernetically-enhanced Rancor. How much you really enjoy this issue will probably depend a bit on how you just responded to the term "cybernetically enhanced Rancor". Star Wars comics have always trod a fairly narrow line between providing authentically flavoured action and pushing the envelope into new areas. For me, a cyborg Rancor pushes just a bit too far towards the silly end of science fiction. It is well paced and illustrated, and pushes the storyline towards its fast-approaching climax, but sometimes it's possible for Kieron Gillen's energetic and ambitious storyline to push a little far off the track. (3/5)

A group of four schoolkids have stumbled onto a group of criminals that seem to have a personal connection to the father of one of the kids: 11 year-old Paige. This excellent comic feels a lot like a mad cross between The Goonies and an early Guy Ritchie film. There's crime, and quite a bit of unexpected violence, but there's also a funny gang of kids up to their necks in trouble. The storytelling and panel layout is wonderfully inventive, and a bunch of period details really sell the setting. It's smart, funny, beautifully written and distinctively illustrated. We're only up to the end of June and this book's only two issues in, but it's already one of my favourites for 2016. (5/5)

It's a familiar trick. Take an easy-to-explain story hook: "It's The Breakfast Club meets Sailor Moon". Pay for an established and popular artist to produce an eye-catching cover - in this case Annie Wu, and it is indeed a great cover. Give it an atypical, indie-friendly name. Now sit back and wait for everyone to buy your comic and look on in horror at just how awful the interior artwork is, or how awkward the writing. I am being unnecessarily mean; the truth is simply that Jade Street Protection Services is a weakly written comic book with some very early career artwork that needs a few more years of experience and practice to reach what most readers would consider a professional standard. I have been a fan of Black Mask Studios, notably 4 Kids (above) and The Disciples, but this sort of book really risks damaging their brand. I will not be back for a second issue. (1/5)

This seems a fairly self-contained issue, in which Marcus and Tara's hunt for the White Man lead them past a travelling sideshow - and a tormented werewolf boy. This book is just old-fashioned to the point of delight. It's script, which combines an unfashionable amount of narration with some very traditional American-style comic art, would not be a hair out of place in the late 1970s. This was the last issue in 3 Devils' first four-issue run. As it ends in a very open-ended fashion I assume Hampton is keen to bring it back at some point in the near future. I hope he does: this is just straight-up entertaining comic book storytelling, and there is always a place for that. (3/5)

The survivors of the Vine, an alien civilization, have arrived on Earth in the hopes of taking a small area of land and setting up a permanent home. Now their peace has been shattered once again by mysterious invaders called the Torment. Much like 3 Devils, X-O Manowar is just well-produced comic book entertainment. Venditti's script does its job with a minimum of fuss and no pages wasted. Joe Bennett's art is clean and easy to read. If you are craving deep originality or experiments with comic book storytelling, this is not the story for you. If you are looking for a science fiction comic where a man in a robot suit helps defend a group of aliens from mysterious giants, this fits the bill pretty much perfectly. (3/5)
Posted by Grant at 9:00 PM