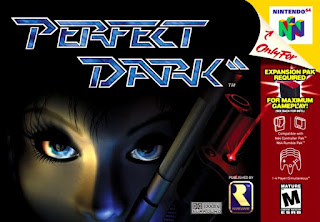 When Rare's first-person shooter GoldenEye 007 became an unexpected smash hit, the development studio fully expected to develop a second shooter based on the film sequel Tomorrow Never Dies. When Rare was outbid on the adaptation rights - and by a reportedly huge margin at that - the nascent sequel was taken back to the drawing board and redeveloped as an original science fiction game. That game was Perfect Dark.

So it is out with James Bond, and in his place is Joanna Dark: operative for the Carrington Institute in the year 2023. She and her employer are caught in a secret war between two alien civilizations. It was a striking transformation of genre, throwing out the contemporary spy action and replacing it with a cyberpunk setting. Perfect Dark had a lot of clear influences: The Matrix, William Gibson, Ghost in the Shell, and so on. It is a much more complex storyline that GoldenEye. On the one hand it gives the game more depth. On the other it does lose a little purity: one of the appeals of GoldenEye was its stripped-back highly linear structure, and that helps to keep it a superior game to this follow-up.

Technically the game is very similar to GoldenEye, with only iterative improvements to the graphics and gameplay. As with the earlier game it had both a single-player campaign mode, and a multiplayer mode. There is a broader variety of tools available to the player here, and a wider array of objectives in each stage. As with the plot, the complexity both helps and hinders. There is more to do here, but it is less instinctive to just pick up a controller and play the game.

Perfect Dark is an excellent first-person shooter. While I feel it does not quite manage to surpass GoldenEye it remains a superb title and a most suitable alternative for players who want more of GoldenEye's style of gameplay after they have tired of that game. Rare did simultaneously release a Gameboy Color spin-off, and would produce a prequel some years later: Perfect Dark Zero on the Xbox 360. Since then the franchise has been effectively abandoned. About a year and a half after Perfect Dark was released, several Rare employees left the company to form the new studio Free Radical Design. Their first-person shooter Timesplitters was as close to a third GoldenEye shooter as we are likely to see. It received two sequels, all of which continued the legacy of Rare's pick-up-and-play FPS formula.
Posted by Grant at 8:10 AM