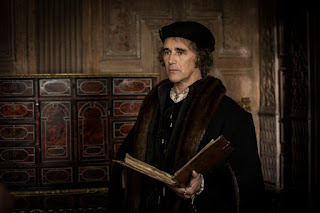 It is 11 February 2015 and time for the fourth episode of Wolf Hall.

Newly crowned Queen Anne (Claire Foy) fails to deliver her King (Damian Lewis) a son. Thomas Cromwell (Mark Rylance) works to quell outrage and sedition against the King, leading to one final confrontation with Thomas More (Anton Lesser) - who continues to refuse to support King Henry's appointment as head of the Church in England.

The last episode of Wolf Hall seemed intently focused upon ambition and gains in power. This fourth instalment moves onto the next logical step: what happens when that rise to fame and authority begins to falter? An increasingly brittle Anne struggles to give her husband an heir, with a growing knowledge that should she fail to do so her time on the throne will quickly end. At the same time Cromwell continues to serve the King's desires around court, with his own growing knowledge that he is only being used and not in any way genuinely favoured.

One of the more iconic images of Tudor England is Hans Holbein's famous portrait of Thomas Cromwell. Painted in 1527 it has sealed the image of Cromwell for hundreds of years. Partway through "The Devil's Spit" there is a cut to Cromwell in profile - the spitting image of Holbein's painting. It is only after a moment we see the rest of the room: Holbein is engaged in painting his famous portrait. It is a neat touch - even if the dates of the action on-screen and the year the real Holbein painted it do not match.

That is part of the issue with historical fiction. It is easy for the reader or the viewer to assume that because the text is drawn from real-life events and people that what they are seeing is some form of historical truth. The fact is there is rarely a work of historical fiction written that does not take liberties - sometimes minor, and sometimes overwhelming. There is certainly a lot of liberty taken in Wolf Hall, particular in how the series has handled Thomas More. The televisual More is, according to many historians and indeed some indignant Catholics, a far cry from the intellectual of the history books. I think the key is not expecting the television adaptation of the man to be an accurate one. For the purposes of the story he works perfectly, and Anton Lesser's ambiguous portrayal makes him a fascinating antagonist.

Equally fascinating is the King himself. Earlier episodes have done an excellent job in luring the audience into rather liking Henry. He seemed irresponsible, sure, but there was a sort of 'naughty schoolboy' amusement to be had in his presence. Here the mask begins to slip. In the episode's earliest moments he learns his new wife Anne has given birth not to a boy and heir as desired but to a girl. 'Call her Elizabeth,' he barks, 'and cancel the jousts.' The audience does not even need to notice that Henry does not ask after his wife's welfare following the birth - the characters he leaves behind note the lack of compassion or interest themselves. In a later scene Henry upbraids Cromwell for getting too familiar with him: 'I keep you because you are a serpent,' he says, destroying in a moment any illusion under which Cromwell may have laboured regarding the King's affections. It's a striking and troubling transformation that only works because it was so well set up in the preceding episodes.

All of this double-guessing and ambiguity is what is making Wolf Hall excel. To an extent it cannot rely on its story, because many of the viewers will already be well aware of how it all ends. It is seeing the characters shift relentlessly towards their fates, and how they react to their respective fortunes, that makes it all so addictive.
Posted by Grant at 7:37 AM