Crusade: "Appearances and Other Deceits" 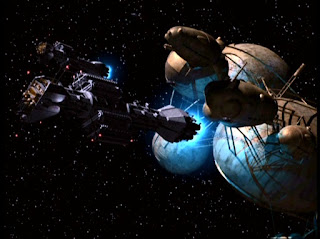 While a pair of Earth government propagandists fuss over how to make the Excalibur more appealing to the general public, the ship stumbles upon a derelict alien spacecraft. Its entire crew is dead, save for one alien held in cryogenic stasis. When the alien is brought back to Excalibur to be revived, a dangerous unearthly force is released onto the ship - placing the entire crew in grave peril.

A few quibbles aside, "Appearances and Other Deceits" is possibly Crusade's first genuinely great episode. It has a fast pace, and its narrative is based around a smart and intriguing concept. It remains imperfect due to one guest character in particular, but if you can put him to one side the remainder is a clever, tense and broadly enjoyable hour of science fiction television.

At the episode's core there is this unnamed alien species. They lack corporeal bodies, and as a result simply colonise other worlds by sending out probes containing members of their species. When an unknown spaceship discovers the probe and examines it, the incorporeal creature inside can invade a physical body and take it over. From there it can extend echoes of itself from person to person by touch. It is an insidious and parasitic arrangement, that is an excellent basis from which to generate a sort of zombie outbreak drama in space. The crew of the Excalibur are being taken over one by one, and you cannot destroy the invading alien presence without also murdering the host.

The primary result of this set-up is some solid tension for pretty much the first time in the series. We have seen the Excalibur crew in danger before, but this really is the first time it feels as if the danger matters.

The combination of alien civilization and pseudo-viral outbreak give the episode the opportunity to focus again on Eilerson (Max Allen Brooks) and Chambers (Marjean Holden), who have slowly shaped up to be two of the series' more interesting characters. Guest stars include Welles (John Vickery), who previously appeared representing the Nightwatch all the way back in Babylon 5's second season, and Kevin (Wayne Wilderson) - a fashion designer and interior decorator brought in to make the Excalibur more appealing to television viewers back on Earth. In Welles' case I had honestly forgotten his earlier appearance, and in fact having him return opened more questions than the episode likely required - after the overthrow of President Clark, how could one of his propaganda team still be working for the Earth government? In the case of Kevin, he is a tediously camp stereotype of the gay interior decorator that is both tiresome and deeply unwelcome. His comedic scenes at the episode's beginning and end are positively cringe-worthy.

Put Kevin aside and there's a lot to enjoy here. It's the fourth positive episode of the series out of eight so far, resulting in a quality ratio of 50 per cent. That's pretty much the definition of mediocre overall, but at least there's been one proper highlight.
Posted by Grant at 2:27 PM