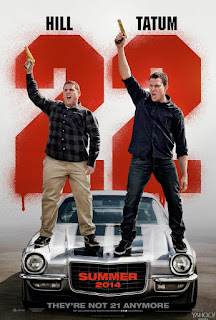 Police officers Jenko (Channing Tatum) and Schmidt (Jonah Hill) move from high school to college in a new undercover mission to track down a fresh teenage drug syndicate. Once again their different experiences undercover threaten to split their friendship apart.

Much like 21 Jump Street defied the odds and made a comedy smash hit out of a parody movie remake, so too 22 Jump Street makes an arguably funnier film out of what would typically be a cynical and repetitive cash-grab sequel.

Let us be honest: sequels are rarely as good as the original work, and superior comedy sequels are even rarer. 22 Jump Street transforms this challenge into a virtue. It not only duplicates the key plot beats and character arcs of the previous movie, it positively revels in pointing it out while it does it. The result is a comedy that escapes its flaws and drawbacks by mocking them as they fly by, and gets funnier and funnier as it goes along.

I suspect this approach is not going to work with every viewer, since despite making a joke out of duplicating much of the original it is still largely duplicating the original. When it is not working with repetition it is generally working on variations - similar things happen, but to a different character, or with a different result. For me the technique works brilliantly, and I found myself laughing at this sequel even more than at the original.

Hill and Tatum continue to work wonderfully together. There's a genuine warmth between their characters that, while played for laughs, really does make them particularly likeable and endearing.  This time around the film gives a lot more material to Ice Cube, which is a welcome development. He features in several of the best scenes, and gets a lot of jokes out being really very angry all of the time. Peter Stormare makes a guest appearance as a smuggling kingpin nicknamed "Ghost". It is pretty much always a pleasure to see Stormare turn up in a Hollywood movie, and this is no exception. He is basically playing a painful stereotype, but as with everything else in the movie it presents him in a knowing and self-deprecating fashion. Jillian Bell is particularly good as Mercedes, the scowling room-mate to Schmidt's new girlfriend. Not only does the script give her huge amounts of comic dialogue but she plays the character faultlessly.

Visually the film goes out of its way to ape the look of over-the-top police action flicks, with numerous scenes echoing filmmakers like Michael Bay and Tony Scott. It's remarkable how much effort has gone into developing an over-produced, colour-tinted wide-angle look purely to then mock and satirise that exact style of film.

In what is probably the best closing credits gag I have ever seen, fake trailers showcase the next dozen or so 21 Jump Street sequels. It is the final hilarious stab by the film of the franchise's growing stupidity, and gleefully renders any further Jump Street films utterly redundant. It appears as if we are going to get one anyway (the incomprehensibly developed crossover MIB 23), but to be honest there really is no need. 22 Jump Street continues the franchise and hilariously murders it at the same time.
Posted by Grant at 5:16 PM