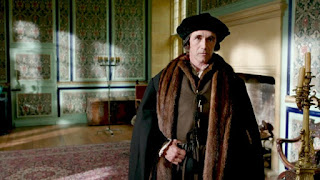 It is 25 February 2015 and time for the final episode of Wolf Hall.

The King (Damian Lewis) wants Anne Boleyn (Claire Foy) out of the picture. He has assigned his advisor Thomas Cromwell (Mark Rylance) to undertake this task by any means necessary. As Anne's allies abandon her, Cromwell spins a trap to capture not only the Queen but her suitors who so offended Cromwell so many years ago.

Everything comes full circle in "Master of Phantoms". Wolf Hall commenced with Thomas Cromwell faithfully serving Cardinal Wolsey (Jonathan Pryce), only to see him betrayed and disgraced. After Wolsey's death Cromwell watched with disgust as four noblemen performed in a garish masque depicted Wolsey's soul being condemned to hell. Now the tables are turned: Wolsey is the second-most powerful man in England and those same four noblemen lie directly in his sights.

Historical fiction should always be considered just that: fiction. It is amazing how many people get hot under the colour whenever a writer tweaks the past, or throws in conjecture, or warps historical accounts to make one person virtuous and another cruel. There is certainly a lot of stretching and transforming going on in Wolf Hall. The series has all-but demonised Thomas More, and in the opposite direction it has given Thomas Cromwell - a reportedly ruthless and unhesitating man - a conscience and a heart. This fictional Cromwell, played excellently by Mark Rylance, has a noble goal the real historical figure likely did not have. This is not a criticism. Fiction is fiction, and viewers wanting a more accurate and revealing profile of the man and his king would be advised to check the history section of their nearest bookshop.

All that in mind it is still a much darker version of Cromwell at the heart of this episode than we have become used to. He has been given a repellent task by King Henry - who barely appears in the whole hour - and in undertaking it is able to simultaneously claim revenge on Wolsey's behalf. If the King wants guilty men - and Cromwell openly admits this to one of his victims - then he simply has to find some men guilty of something. Mocking his mentor and friend would appear to be a sufficient crime for which to die. There is a cruelty here we have not fully seen before in Cromwell. He has arrived in a very dark place.

His target, an increasingly desperate Anne Boleyn, is slipping out of control. In one runaway conversation she demeans her musician Mark Smeaton and abuses her family members - both verbally and physically. In time when she most needs support and help, she angrily drives everyone away. It does not take long for her one-time allies to begin working against her, giving evidence to Cromwell - whether it is true or false does not appear to matter.

It is notable how ambiguous the episode becomes regarding Anne's alleged misdeeds. It seems clear that the accusations against her are, within the context of this fictionalised drama, in some part true. At the same time it is clear many of them are not. The truth is never separated from the lies; after all, given the result of the trial is a foregone conclusion, what would be the purpose in teasing each claim out? It makes "Master of Phantoms" a much stronger episode than it otherwise might have been. One can imagine a production team with less self-control, like those in charge of the popular hit Game of Thrones, playing out each accusation in turn with a series of sex scenes. Those making Wolf Hall know better.

When Anne's execution day comes it is executed with remarkable restraint. It is a cold, windy day. She is clearly terrified. She speaks, perhaps a little too quietly, to the crowd of onlookers. An executioner undertakes her killing not with an axe but with a sword. It is an oddly elegant moment, and beautifully staged. As her ladies-in-waiting gather her body, their hands and dresses are stained with blood. It is not a graphic scene, but it is an unexpectedly frank one.

At the episode's end, Cromwell return to the palace with a heavy heart. He is embraced upon his arrival by an ecstatic Henry. We linger on Cromwell in the embrace before the credits roll: his eyes haunted, his expression forlorn. What was it all for? Why did so many people die to reach a point where Henry simply had the cause of those deaths killed herself? It is a hollow, disturbing, and unapologetically open conclusion to a masterful tragic drama.

Later this year Hilary Mantel's third Cromwell novel is scheduled for release. One can only hope that this excellent cast and crew return to adapt it as well.
Posted by Grant at 7:33 AM