The X-Files: "Mulder and Scully Meet the Were-Monster" 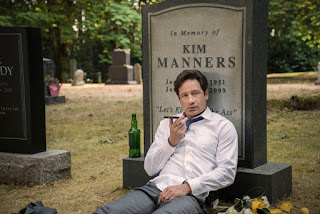 It is 1 February 2016, and time for another episode of The X-Files.

Mulder (David Duchovny) is already disenchanted with his return to hunting down paranormal creatures and UFOs. While investigating a string of murders in which the victims have had their throats torn open, Mulder uncovers evidence of some form of humanoid lizard creature - but is he willing to believe what he sees?

Now that James Wong and Chris Carter have both returned to the kind of episodes they generally wrote for the original X-Files, the task now falls to Darin Morgan to deliver the kind of off-kilter, comedic take on the series that made him famous. Morgan was the writer of such episodes as "Humbug", "Clyde Bruckman's Final Repose" and "War of the Coprophages". He brings his entire bad of tricks to bear on the series again, including humorous characters, satire, unreliable narrators and an energetic glee at puncturing the entire style and tone of the series in general. It is wonderful.

The focus of the episode is on comedian and actor Rhys Darby, who plays the pseudonymous Guy Mann - a nervous, confused mobile phone dealer who may or may not periodically transform into a humanoid lizard. Darby commits to the role with enthusiasm, turning Guy into a comic gem. David Duchovny and Gillian Anderson also get their fair share of comedy material here; the result is an episode that is much much sillier than the previous two, but also a lot more fun to watch.

The episode is packed with in-jokes, including visual references to old storylines or dialogue that hark back to specific episodes. Mulder's infamous red Speedos get a cameo, which should please many people in the audience. Certain departed crew members get eulogised in a town cemetery (see the photograph above). My personal favourite gag is how Guy spends the entire episode dressed as Darren McGavin in Kolchak: The Night Stalker.

What is remarkable is that in between all of the jokes and gags Morgan actually creates a proper three-act storyline with plot twists and a few genuine surprises. The assorted jokes would have been reasonably entertaining, but a proper story upon which to hang those jokes makes it so much more effective. Much of the episode may see Mulder follow Guy around attempting to discover his true nature, but there are still several murders to be solved and a killer to be tracked down: whether it is Guy or someone else is up to Mulder and Scully to learn.

The versatility of The X-Files was one of its key strengths, and this episode proves that despite the 14-year gap that versatility is still there. If this versatility remains, we can expect to see a 'monster-of-the-week' episode within the next three episodes, as well as something supernatural. We shall see. For now, this episode brings the season's quality ratio up to 67 per cent: two out of three, which isn't bad for a show this long out of practice.
Posted by Grant at 5:09 PM