Star Trek: The Next Generation: "Disaster" 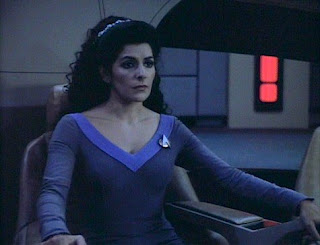 It is 21 October 1991, and time for another episode of Star Trek: The Next Generation.

When the Enterprise collides with a quantum filament, it leaves the ship's crew trapped in a variety of life-and-death situations. Troi (Marina Sirtis) finds herself in command for the first time, aided by Chief O'Brien (Colm Meaney) and Ensign Ro (Michelle Forbes). La Forge (LeVar Burton) and Dr Crusher (Gates McFadden) are trapped in a cargo bay with a radioactive fire. Worf (Michael Dorn) must assist Keiko O'Brien (Rosalind Chao) in giving birth in Ten Forward. Riker (Jonathan Frakes) and Data (Brent Spiner) have to find a route to the Engineering deck to stop the ship from exploding. Captain Picard (Patrick Stewart) is trapped in a turbolift with three crying children and a broken ankle.

The Next Generation's tribute to the all-star multi-plot disaster films of the 1970s is a gleeful, wonderfully indulgent and wholly entertaining romp. It is good-humoured, features a strong balance between the regular cast members, throws in a couple of semi-regular characters for good measure, and keeps a fast, addictive pace from the cold open to the closing credits. It is not Shakespeare by any strength, but it is a tremendous amount of fun.

The balance between the storylines in "Disaster" is so even-handed that it is effectively like watching five episodes at the same time. It is worth running through them in turn, as some work better than others. The bridge scenes are great, giving Marina Sirtis a comparatively rare chance to act more than a few lines and a troubled expression. As the highest-ranked officer on deck, she is immediately in command of the Enterprise - a situation in which she's never been before. The ship is in disarray, with communications and most power down. The warp drive is ticking down to exploding, so Troi faces a dilemma over detaching the saucer and escaping to safety - but leaving those in the drive section to die - or keeping the ship together and attempting to rectify the problem with an ever-increasing chance of the ship blowing up and killing everyone. O'Brien wants to stay a fix the problem, which makes sense for his character. Ro wants to cut losses and detach the saucer, which has a bleak pragmatism to it that suits her character. Troi is the one stuck in the middle trying to decide what course of action is correct. It is a great showcase for an underutilised and often poorly written character, so I found it very welcome.

For Picard, a man who has been long-established as deeply uncomfortable around children, getting trapped in a turbolift with the three winners of a primary school science fair must constitute some form of specific and awful hell. The sequence is remarkably charming and sweet, partly because it very nicely scripted and partly because the episode has lucked out in casting three genuinely talented juvenile performers. John Christian Graas is a particular highlight as the deadpan, nihilistic Jay-Gordon.

Crusher and La Forge's predicament is easily the weakest of the episode's storylines, alternating between the awkward (Crusher trying to convince La Forge to join the cast of an amateur Gilbert and Sullivan production) and the hugely improbable (the controls to activate and de-activate the shields that keep the air inside a cargo bay are about 10 metres away from one another).

Riker and Data's journey through a series of service crawlways is a little stronger, mainly because it draws a lot of comic value out of Data using his body to short out an electrified passageway - requiring Riker to go on with just Data's disembodied head. The scripting here is, to be honest, about as slight as it was for Crusher and La Forge, but it has a lot more opportunity for levity. That goes a long way in this kind of an episode.

The episode's highlight, however, is absolutely Worf guiding Keiko through childbirth. He has undertaken a single emergency medicine course at Starfleet Academy - which at this stage is about a solid decade ago. He valiantly does his best: commanding her to stop having contractions due to the accident, commending her when her cervix fully dilates, and shouting at her to push in his best Klingon warrior persona. It is all comic gold, because Michael Dorn's phenomenal deadpan delivery makes it simultaneously ridiculous and oddly sweet. I am honestly not sure there is a funnier thing in the whole of The Next Generation than Worf as a birthing coach: Dorn and Rosalind Chao absolutely nail their scenes together, and of course it climaxes with the debut of recurring Star Trek character Molly O'Brien - to be played by young Hannah Hatae in 11 episodes of Deep Space Nine.

This episode is entirely ridiculous fluff, but it is all achieved with such enthusiasm and knowing gentle mockery that I cannot help but love it. Season 5 really does showcase The Next Generation at its absolute best, and this is a perfect example. Five episodes in, and four of them have been great: the Season 5 quality ratio rises to 80 per cent.
Posted by Grant at 4:59 PM