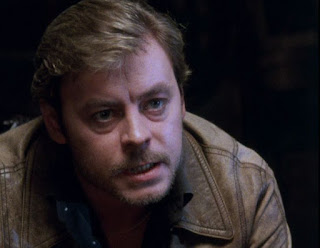 It is 17 September 1979 and time for the second part of Tinker Tailor Soldier Spy.

Retired intelligence deputy George Smiley (Alec Guinness) has been brought back into the fold to debrief runaway agent Ricki Tarr (Hywel Bennett), who has returned to London after three months in hiding. He brings with him a disturbing story about his last mission - and the discovery that there is a mole hidden somewhere in the senior command of MI6.

The leisurely and thoughtful pace of Tinker Tailor Soldier Spy continues in its second episode, the bulk of which is dedicated to Ricki Tarr's story. To an extent it requires the viewer to put aside any expectation of following up directly on the events of the first episode, and simply enjoy Tarr's adventure on its own merits. It is a slightly odd episode as a result, but ultimately a satisfying one.

With so much time devoted to Tarr's Portuguese assignment, it is good that Hywel Bennett provides such a strong performance. He is a 'scalphunter', a field agent specifically assigned for tasks like blackmail, burglary - even murder, and his latest assignment sees him shadowing a Russian named Boris (Hilary Minster) to try and turn him to work for the West. While he is not successful in that regards, he unexpectedly gets much further with Boris' partner - a woman named Irina (Susan Kodicek). It is from her that he discovers that there may be a mole inside the 'Circus' of MI6 headquarters.

There is not any action in Tarr's mission, but instead there is a constant and growing potential for action. The further his story goes, the more likely it seems that someone is going to burst in with a gun or a knife. The result is a long-boil exercise in suspense and paranoia.

Smiley's response to Tarr's story is wonderful. He is calm, dry and ambiguous. Its effect is rather unsettling. It is remarkable how different Alec Guinness can make his character appear just by putting on a pair of glasses and lowering his head slightly. At times Smiley seems like a kindly old English gentleman, but the slightest gesture transforms him into a visibly cunning and quite foreboding intelligence mastermind. I think it is one of the best performances Guinness ever delivered - and certainly his last truly great one.

After two episodes, it is remarkable just how little the story has progressed. We have seen a mission to Czechoslovakia go awry, and a reluctant Smiley recruited back to hear Tarr's story - the bulk of which merely confirms information given by Smiley's anonymous employer "Control" back in the early minutes of episode 1. It is well acted, intelligent drama, but by modern standards it's certainly very slow.
Posted by Grant at 5:10 PM