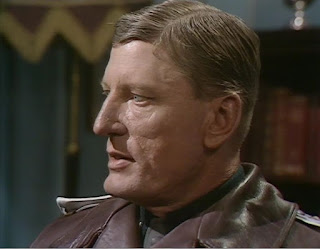 It is 16 November 1972 and time for another episode of Colditz.

Colditz receives a new security head in the form of Captain Hauptmann Ulmann, a cold and authoritarian officer who is quick to home in on the prisoners' various escape attempts. His appointment seems odd - he is of too high a rank for such an ordinary prison - and a scheme is developed to find out why he has been appointed at the prison.

One of the best aspects of Colditz so far has been the way it has avoided portraying its German characters as one-dimensional Nazis. It's obvious to anyone that clearly not all Germans in World War II believed in what they were doing, or the full extent of the Nazi's agenda. Colditz presents a prisoner-of-war facility operated by the Wehrmacht whose officers have no love for the Gestapo or particularly the SS. They are for the most part career soldiers who are obliged by duty to follow whatever German government is in power. It is a provocative approach to take, since Nazi Germany remains an abhorrent spectre in world history, but it is also more accurate, intelligently presented and dramatically effective. Making a series where the German guards and gaolers are one-dimensional villains would have been easy. Making a series where they are fleshed-out and intelligent human beings must have been much harder - but the benefits are obvious on the screen.

Bernard Hepton is highly sympathetic as the Kommandant - we learn here his first name is Karl, but he still lacks a surname. While he is unfortunately saddled with a bizarrely awful wig - it seems to ride up as he performs, creating the illusion of a slightly conical head - he gives his character sensitivity and integrity. He performs his job to the best of his ability, but he is not a cruel or unfair man, and visibly has respect for the prisoner over whom he watches.

When Captain Ulmann arrives, it looks like he is going to be the 'bad cop' to the Kommandant's 'good cop'. For one thing he looks extremely intimidating. Actor Hans Meyer is physical the very model of the stereotypical German soldier: tall, solidly built, blonde-haired and with a constantly severe facial expression. The episode leads you along for some time in thinking he is the exact sort of cliched screen Nazi that the series had thus far avoided. It is revealed that he is supervising security because a group of SS officers are coming to the camp to meet about new security arrangements. It is only quite late in the episode that Ulmann's full personality becomes clear. He is a serious man with a stern demeanour, but he is not a monster nor an active Nazi. He is actually an insurance manager and army reservist called into active service during the war. He is already a wonderfully well-developed character , and Meyer plays him incredibly well. I am keen to see how he develops in future episodes.

One big surprise in this episode is the addition to the cast of American star Robert Wagner as Flight Lieutenant Phil Carrington. He only has a minor role here, hassling both Preston and Grant about when he will able to escape. After Wagner's later career roles in the Austin Powers franchise it is initially a little difficult to treat his character seriously. Hopefully it will become easier once he gets a little more screen time.

I am now five episodes into Colditz, a third of the way through its first season. It has been an immensely enjoyable series, and has aged remarkably well. Of the five episodes so far four of them have been great, and two (the second and third) absolutely exceptional, with only the series premiere being a little underwhelming. Anybody looking for a strong British drama series and a realistic take on World War II will likely enjoy this series immensely.
Posted by Grant at 9:56 AM