The X-Files: "My Struggle" 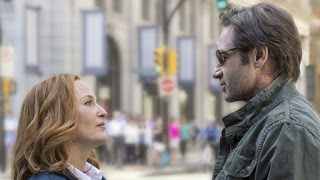 Former FBI agents Fox Mulder (David Duchovny) and Dana Scully (Gillian Anderson) are reunited to meet with a conservative TV host named Tad O'Malley (Joel McHale). He claims that the alien visitation investigated by Mulder and Scully throughout the 1990s were simply a smoke-screen for a clandestine operation by the American government.

The return of The X-Files to Fox after a 14 year gap was certainly a surprise. All previous indications were that the franchise died when its second feature film, I Want to Believe, under-performed in cinemas. While surprising, it was to my mind a welcome development. I have always felt that The X-Files was a robust enough format that it could in theory run indefinitely. This new six-episode season was in a sense a victory lap, with key writers from the original series returning to tell all-new stories featuring former agents Mulder and Scully. This premiere episode is written and directed by Chris Carter, the series creator. I have always felt there were two kinds of Carter. One of them wrote some of the series' best key episodes in the early years. The other kept writing key episodes as the series went on, but they become tortuously complicated and dramatically inert. His series finale "The Truth", the last TV episode preceding this, was pretty much the worst thing Carter ever wrote.

Sadly it is this second Chris Carter who turned up to work for "My Struggle". This is a 44-minute collection of obsessively paranoid monologues, as both Mulder and O'Malley count off the manner in which a theorised takeover of the United States of America would occur, all at the behest of a secret community that uses stolen alien technology to fake UFO abductions across the country. We do not really get a plot here, but rather people telling us the plot. There are a few key special effects sequences to stimulate viewer engagement, but altogether this is a bizarrely dull piece of television. It is a bit like a live-action adaptation of that 'reverse vampires and saucer people' speech in The Simpsons. Goodness knows how its title relates to the plot. Either a link to Nazi Germany was lost in production or it's an appalling and unfortunate coincidence.

It is also patently nonsensical. The X-Files tried this tack before, suddenly claiming the entire UFO phenomenon was faked and that Mulder had been fooled all of his life. It felt deeply unconvincing and trite then (in Season 4's "Gethsemane") and it feels completely unconvincing now. It is a genuinely weird direction to take as well: after 14 years off the air the audience finally gets a new episode, and it pretty much tells them that the preceding 202 episodes were an irrelevant lie. Talk about biting the hand that feeds you.

The performances by the cast are all weirdly stiff and awkward, as if it took Carter a while to get back into the groove of directing television again. It may also be the dialogue, which is more often than not fairly risible. There is some nice work: the episode does a good job of noting Mulder and Scully are no longer romantically involved, and Scully's mention of Mulder's clinical depression and mental illness actually ties up pretty well to the previous nine seasons of his irrational, obsessive activity.

If this season is supposed to bring back all the old styles of X Files episode, then I guess "My Struggle" is a valid episode to include. It reminds us of just how confused and silly the series ultimately become, and how Chris Carter seemed to lose perspective on his own creation. It is great to see Duchovny and Anderson back, but it is a shame to see their return marred by such a weirdly awful episode. It's a deep shame.
Posted by Grant at 8:43 PM