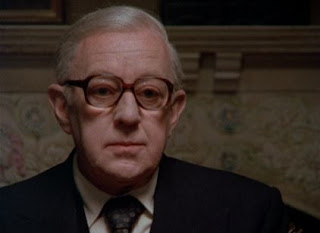 It is 10 September 1979 and time for the first episode of Tinker Tailor Soldier Spy.

The BBC have a long-held reputation of exceptional television drama. I recently watched and reviewed Wolf Hall, which is probably the latest of their hugely successful miniseries. To follow on from that I decided to jump back a few decades to re-watch of their most famous and acclaimed television miniseries ever: the seven-part adaptation of John Le Carré's novel Tinker Tailor Soldier Spy. While the series was excellently adapted by Arthur Hopcraft and well directed by John Irvin, it remains best known for Sir Alec Guinness' masterful and understated performance as retired deputy head of intelligence George Smiley.

In this first episode a top-secret mission to Czechoslovakia goes horribly wrong, and rather than meet with a potential defector British agent Jim Prideaux (Ian Bannen) is shot and captured by Soviet forces. Some time after the incident former deputy head George Smiley (Guiness) - who resigned in the aftermath - is unwillingly pulled back into duty.

As is the case with a lot of decades-old television drama, Tinker Tailor Soldier Spy runs at a comparatively slow pace. It takes its time, setting up a range of characters over the first hour and establishing the basic premise of the story. Somewhere in the higher ranks of MI6 there is a mole feeding intelligence back to Russia. There are four likely candidates. Clearly it will be up to Smiley to tease out which of the four it is.

The series presents a remarkably drab and bureaucratic vision of foreign intelligence. While it begins with Prideaux's disastrous mission to Prague, it is notable that his mission consists of an awful lot of walking around looking paranoid and sitting around in cars. For the bulk of the episode we are with smoking men in offices, or George Smiley sitting through the world's most tedious dinner conversation. It is all deliberately low key, and it makes a great impression. Only three months before this episode was first broadcast, millions of British viewers were rushing to the cinema to see Roger Moore in the latest James Bond film Moonraker. The difference in tone and style between the two is remarkable.

Alec Guinness is, of course, marvellous as Smiley. He's smart and thoughtful, and yet by his own admission a bit of a coward. He is too meek a man to tell an irritating boor to his face how little he thinks of him, and suffers through dinner with him purely to avoid the confrontation involved in telling him to go away. His wife is clearly having multiple affairs, with both George's knowledge and everybody else's too. Guinness plays the character largely through a series of frowns and momentary sighs: his Smiley is old, and tired, and too good at his job to quietly fade away.

The supporting cast are similarly strong, whether it is Michael Jayston as the dutiful offsider Peter Guilliam, or Hywel Bennett as an MI6 agent gone AWOL, or Ian Bannen as the unfortunate Prideaux. They help build Tinker Tailor Soldier Spy into a measured and purposeful slow-burn thriller. All we get in this first week are introductions and set ups, but Bennett's closing monologue pretty much opens the door to a more thrilling story in the next episode. It is an invitation I find impossible to resist.
Posted by Grant at 12:44 PM