The Astrocytes: Because I'm Really Not Sorry (2012) 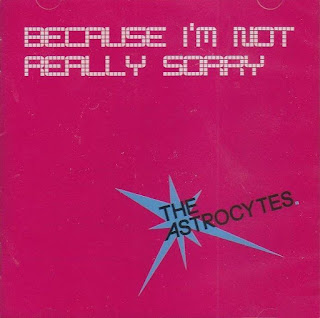 The Astrocytes were an independent rock band based in Hong Kong. I bought their debut CD Because I'm Really Not Sorry while in the city in 2012, but to be honest have not heard anything from them since. I suspect like most independent groups they have long since separated and gone their separate ways. Their website does not even mention this album, and its only link is to an empty Myspace page. Lead singer Helena Angwin appears to be working as a professional model these days. Guitarist Joe Ashley Cheng is apparently a professional songwriter.

Because I'm Really Not Sorry is a weirdly retro album, stylistically speaking. More than once I am reminded of the sorts of mid-1990s grunge and independent British pop-rock that I listened to as an undergraduate student. It also boasts that near-trademark stark, simple sound that typifies an independent low-budget CD release. There is not really anything original or attention-grabbing about this album, but it does have a lot of straight-up energy and heart to it. I hope the four members of the band have moved on to better and more successful things.

The album begins with "Not Really Sorry", a generic upbeat indie rock number featuring decent guitar work but oddly thin vocals. I think it is partly a reflection of the album's low-budget development, which is always an issue with independent bands. It does feel like a song that would improve with better and more elaborate production values.

The next three songs show off what seems like clear influences. "The Last Punk" is a throwback to mid-1990s grunge music. "Tiger" is more folksy and easy-going. "Singing" feels like a song ripped from an early Cranberries album. All three are solid and enjoyable indie rock songs, none of them strikingly original but all of them very easy listening.

Sadly from there the album slips up quite badly, parading a series of fairly generic and ordinary rock songs past the listener. "Jane" pops out above the horizon a little, mainly due to what feels like a fairly strong Cantopop influence, but songs like "I Miss You", "Thank You" and "Falling" simply don't leave a worthwhile impression.

The official closing number "We Are the Beautiful" is a much stronger, richer song than the rest of the album has provided. All things considered it is definitely the stand-out. Bonus track "Beggar" brings back a little of the energy from the beginning of the album, and is a fun little extra. Certainly it is better than many of the album's main songs.

Because I'm Not Really Sorry showcases a young band with promise, but a quick look around the Internet suggests that the Astrocytes' recording career began and ended here. It is an imperfect album, but at the same time it is good to see Hong Kong's independent music scene at work. So much of the city's music is mass produced pop ballads - it is always great to see a little rebellion and energy in the mixture.