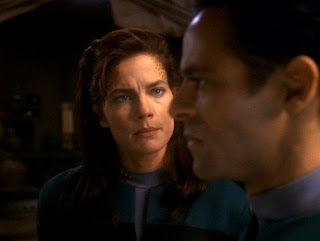 Bashir (Alexander Siddig) and Dax (Terry Farrell) respond to a distress call from a planet on the edge of Dominion space. They find a dying civilization, all of whom have been infected by a mysterious plague known as the Blight: a centuries-old punishment from the Dominion. They are born with the disease, and after a random period of years they undergo "the quickening" and die in agony. Dr Bashir immediately leaps in to find a cure, but soon discovers his ambition may have run away with him.

"The Quickening" is an episode that creeps up on you. It begins as something that seems relatively ordinary and commonplace for a Star Trek episode. Before long it transforms into something starkly horrific, and then awfully tragic, and ultimately something that is oddly uplifting. That's a hell of an emotional journey for 42 minutes of television.

Pretty much the key characteristic of Julian Bashir when he first appeared in Deep Space Nine was his deeply naive arrogance. Here was a star medical student, graduated to become a doctor, actively demanding a Starfleet post out on the frontier in order to encounter new diseases and medical conditions and then courageously cure them in short order. Four seasons of life on the station has leavened his character somewhat, not to mention the friendships of the likes of Miles O'Brien, Dax and Garak, but that arrogance has always remained. He is a man deeply over-confident in his own abilities.

"The Quickening" is written specifically to trip that confidence up and send Bashir crashing to the floor. He sees a disease he thinks he can fix, but not only do his attempts to find a cure fail, they actually make the disease more severe. He finds himself not just hurting his patients but forcing them into agonising deaths. It is a blunt, horrible, and immensely effective narrative development. He goes in full of bravado and comes out the other end wracked with shame, embarrassment and despair.

When Major Kira (Nana Visitor) arrives to collect Dax and Bashir and return them to the station, Bashir elects to stay behind. It is not because he refuses to let the Blight defeat him, and it is not about his pride. It is because he has come to know one pregnant women on the planet, and wants to do everything he can to keep her disease in check until she can give birth. This final third to the episode consists of a huge change in tone. It is not horrific, but simply emotionally powerful, beautifully acted and ultimately just enormously sad.

Star Trek is a franchise packed with neat resolutions and simple answers. The much-ridiculed "reset button" gives viewers the understandable expectation that a solution to every problem will be found by the end of the hour, that everything will be okay, and that the audience will get a happy ending. Here they do not. It is not an entirely tragic ending, but things are not solved and the disease is not cured. Bashir has made things better than before he arrived, but there is a long road ahead to success - we have to make do with seeing that he has started on that road. It's the kind of ambivalent, open-ended conclusion that I adore.

This is one of Season 4's absolute best episodes. Well written, well acted, and very effectively directed by Rene Auberjonois. It is the 14th good episode out of 23, giving the season a current quality ratio of 61 per cent.
Posted by Grant at 10:25 PM