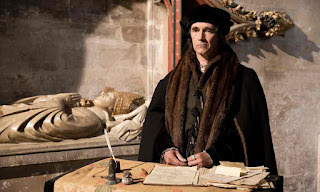 It is 18 February 2015 and time for the fifth episode of Wolf Hall.

There are two lesson in this fifth and penultimate episode of Wolf Hall. After bending over backwards for years to give Henry VIII what he wants, Cromwell now discovers that the King wants something else. It is an inevitable development for the series, and not a surprise. If there is one thing a general audience knows about Henry it is his six wives, and as he is currently on wife #2 it does not take a lot of imagination to see where Anne Boleyn's story is headed.

At the same time it incredibly strong drama. Cromwell has dedicated his life to the King, and as he explains at one point the trick with handling Henry is anticipating his desires - and then hoping desperately that one has anticipated correctly. This unpredictable and capricious monarch has become a frightening and troublesome figure. Please him and get showered with praise and wealth. Displease him and one can just as soon find him or herself banished - or dead. Lesson one: Cromwell is trapped playing a game that he cannot ever win.

This leads on to the episode's second lesson. Henry insists on engaging in a jousting tournament and as a result appears to have been killed. He survives - thanks to Cromwell's speedy aid - but for a brief moment Cromwell perceives a life beyond Henry and is terrified. Should anything happen to his King and protector Cromwell will almost certainly be murdered or executed within a week - and he knows it. He has strapped his fortunes to Henry, and his rise, fall or basic survival now depend upon one man. It is not a comfortable place to be. Lesson two: when the game ends, Cromwell will surely die.

Cromwell is also committing his fair share of mistakes. He diverts the King's journey across England to Wolf Hall, where he plans to meet and romance Jane Seymour - only to lose her when she catches the King's eye. When Henry appears dead Cromwell's first instinct is to have Princess Mary - daughter of Katherine - protected. This earns the ire of Anne Boleyn. It is noticeable that Cromwell is now losing a lot more battles than he is winning. An attempt to force the Holy Roman Empire ambassador's hand in acknowledging Anne as Queen results in Cromwell being screamed at by the King. This is an excellent and somewhat depressing episode.

Strong supporting characters abound. I have not previously highlighted Mathieu Amalric as the ambassador Eustace Chapuys, a rare friend to Cromwell until he is betrayed by him. Similarly strong is Bernard Hill as the foul-mouthed and belligerent bully Lord Norfolk, who has been an enormously entertaining presence since episode 1.

One episode to go, then. Henry wants Anne out of the way, to replace her with Jane Seymour. Cromwell is running out of allies. The Pope may yet still excommunicate Henry. This has been a near-faultless series. It is must-see drama: smartly produced, intelligent and beautifully performed.
Posted by Grant at 4:37 PM