Bodacious Space Pirates: "The Bonds Between the Four" 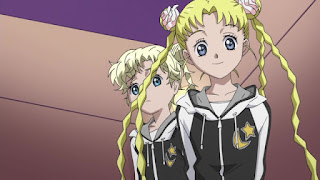 It is 12 May 2012, and time for another episode of Bodacious Space Pirates.

The space yacht club head back up to the relay station to clean the Odette II, finding some half-forgotten space dinghies in the process. Marika takes the opportunity to head over to the Bentenmaru for some spring cleaning of her own, accidentally losing her ID ring to power the ship in the process.

This is a slightly weird episode, but if any form of TV entertainment is going to dedicate an entire episode to cleaning and tidying spaceships it is going to be anime. This is yet another 'downtime' episode of Bodacious Space Pirates, giving the ongoing narrative a pause between story arcs and taking the opportunity to do something a bit lighter and more relaxed.

The main problem with this approach is that Bodacious Space Pirates operates at a pretty relaxed pace at the best of times, and so there really isn't a need to slow things down even more for this kind of episode. While I have appreciated the characters, the setting and the general tone of the series, the big problem that I keep having is just how laid-back and slow it all seems. Quite simply, not enough seems to happen on a week-to-week basis. This episode, in which Marika does some cleaning around a spaceship and frets over a lost key, seems remarkably slight even by the series' own standards.

The cleaning scenes work, and are pretty funny - particularly Marika's attempts to use the Bentenmaru's artificial gravity controls to make the job easier - but that makes up about five minutes out of more than twenty. The rest just sort of ambles around, setting up a few things for the next mini-arc and playing with the character relationships. It isn't awful by any stretch, but it is fairly difficult to maintain one's full attention when the dramatic stakes are so low. For most anime this would not annoy me deeply - I'd simply stop watching, figuring the show is not for me. The problem with Bodacious Space Pirates is that it is so close to a series that is for me that I find myself continuing to persevere. I am enjoying the series overall, but it sometimes makes me struggle to reach the entertaining bits.

With a new arc kicking off in the next episode, I hope things pick up a little again. As for this episode, I simply didn't get enough enjoyment to make the viewing worth the time. It leaves the series with 13 good episodes out of 19, and a quality ratio of 68 per cent.
Posted by Grant at 7:41 AM