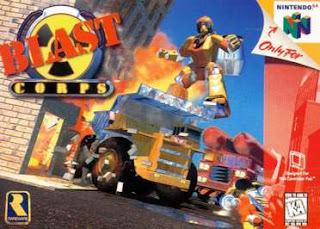 Here we are, with yet another Rare videogame for the Nintendo 64. Aside from Nintendo itself Rare was easily the most critically important developer for the console, generating a wave of hit titles including Banjo Kazooie, Perfect Dark, Conker's Bad Fur Day, Donkey Kong 64 and GoldenEye 007. Blast Corps was their first major N64 game, and while it actually sold below expectations it was widely acclaimed and remains an exceptional videogame today. Quite why it has never been reworked or revived in the past two decades is beyond me: it deserves the exposure.

The game is, like most great titles, relatively simply to understand but rather difficult to master. The player controls a range of demolition vehicles travelling ahead of a runaway missile carrier. Should the carrier collide with an obstacle the game ends. The player is therefore tasked with levelling the ground and demolishing buildings as they go, always against a rapidly decreasing time limit.

It is in effect an action game with the mechanics of a puzzle game. The player has multiple vehicles at her or his disposal, including a bulldozer, a dump truck, a buggy and a giant robot. Each vehicle achieves a different task. Demolishing a path for the carrier requires a combination of vehicles and techniques. There are 57 levels in all, and they get progressively more complex and difficult as the player advances.

It is not a perfect game. Many players found the control mechanism quite difficult to master, for example. On the other hand it received near-unanimous acclaim for its bold 3D graphics and its lack of fogging to mask the draw distance. Even by the standards of 1997 it feels a remarkably old-fashioned and simple game. It has a specific style of gameplay and it refuses to deviate from it. A less confident development team might have felt the need to introduce additional complications and gameplay features as the game progressed - the development team, whose number ranged from four to seven, never felt the need. It's a choice of which I firmly approve.
Posted by Grant at 9:02 AM