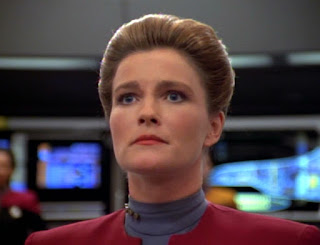 It is 16 January 1995 and time for the first episode of Star Trek: Voyager.

When the USS Voyager is dispatched to track down a rogue starship a mysterious energy wave throws it 70,000 light-years across the galaxy. The crew soon discovers an immensely powerful alien intelligence that brought them there, as well as a fragile underground civilization - the Ocampa - who rely entirely on the protection of their 'caretaker' to survive.

In 1994 Paramount wrapped up their immensely successful syndicated series Star Trek: The Next Generation, and pushed its cast into a series of feature films. At the same time the studio was finalising plans to launch its own television network UPN. With spin-off series Star Trek: Deep Space Nine successfully running in syndication the opportunity rose to launch UPN with an all-new Star Trek television series to take The Next Generation's place and act as the network's flagship programme. "Caretaker" was its 90-minute premiere episode.

Voyager was and remains a fairly divisive series. Many Star Trek fans loathed it, either due to its Lost in Space-style set-up or to its characters, and in many occasions for what were seen as atypically weak storylines and scripts. At the same time many Star Trek fans actively embraced its more upbeat outlook and brighter aesthetic compared to the sombre and complex tones of Deep Space Nine. At the time of its original broadcast I found myself somewhere in the middle: liking some characters but not others, enjoying some episodes while actively hating the rest. One thing I do remember is really liking the 90-minute premiere, and having rewatched it for the first time in more than a decade I still stand by that assessment.

The first episode is hard. There is a need to demonstrate the setting and tone of a series, introduce a broad cast of characters, and tell an entertaining story at the same time. For the middle requirement Voyager certainly had its work cut out for it. With a cast of nine, Voyager had the largest regular character set of any Star Trek series. To its credit the episode manages to introduce all nine in an effective and clear fashion. The viewer finishes the episode knowing all of their names, their role in the series and their basic personality. The tone is clear as well, showcasing a style much closer to The Next Generation than its sister series Deep Space Nine.

Story-wise it deliberately hews close to the post-1987 blueprint for the franchise. The idea of a Starfleet vessel thrown thousands of light years away from Federation space is an old one, with the only difference here being that the starship does not make it back home at the end of the episode. Shortly after their arrival the crew experience a strange illusory encounter that draws on their own memory and experience: the same sort of historical masquerade occurs in numerous Trek episodes - including the first episodes of both The Next Generation and Deep Space Nine.

At the same time there are a few genuinely inventive touches. The episode takes its time to introduce Voyager's first officer, chief medical officer and helmswoman, only to kill all three of them off when the ship is violently thrown into the Delta Quadrant. The scene creates a sense of chaos and confusion that is rarely seen in a Star Trek episode. The stakes are raised higher than usual as a result. Amidst the carnage we are introduced to one of the series' master strokes: an emergency medical hologram (Robert Picardo) who is activated when the sickbay's own staff have been killed in an explosion. Picardo's terse performance is wonderful, and is one of the highlights of both this episode and the series going forward.

Not all of the regular characters are so lucky. Soon after arriving in the Delta Quadrant the Voyager crew encounter an alien drifter named Neelix (Ethan Phillips). He is an irritating character, and sadly by-and-large remains irritating for the next seven seasons. It is clearly not Phillips' fault, who gamely performs the character he has been given. It is a pity he was not given a better character.

Working in the opposite direction is Captain Kathryn Janeway (Kate Mulgrew). It is of course a much-overdue decision to feature a female captain - and it was one that was only agreed to by Paramount in the final weeks before shooting commenced. Mulgrew does a superb job. Her portrayal of Janeway is multi-layered and richly developed, showing different sides to her personality from one context to the next. She is soft and hard when required, intelligent and thoughtful, and distinctly different from any of her three predecessors in the captain's chair. I have never understood any fan's dislike of Janeway as a character. I would go as far as to claim her as Voyager's very best.

"Caretaker" does an excellent job of telling a story as well as set up the series. It is well paced, with a variety of settings as the story develops. It is visibly well-budgeted with some excellent action scenes and starship battles. It finishes with a pretty decent set-up for a Star Trek series: the Voyager has tracked down the rogue Maquis members, but they are all trapped on the other side of the galaxy with no way home other than a 70-year flight. The two opposing sides will have to cooperate for now. How that cooperation goes is a matter for future episode reviews.
Posted by Grant at 7:15 AM