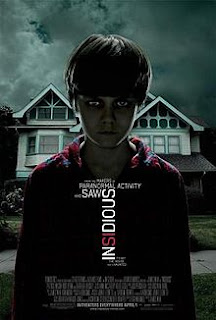 The Lambert family has just moved into an expansive new home. Within days, however, strange occurrences are disturbing them. Objects are going missing, or moving. Doors quietly swing open and closed without explanation. Eldest son Dalton (Ty Simpkins) slips from a ladder in the attic and falls into a coma. It is clear that something supernatural is threatening them. When they move to another house, the haunting follows them there and their lives come under active threat.

You have to marvel at the apparent financial wealth of a high school teacher and a stay-at-home mother can afford to not only purchase a two-story mega-house but then immediately sell it and buy a second one at the first sign of ghosts. It is a running joke with American film and television, selling an ideal of an expansive family home that the majority of viewers will never afford, but here it seems particularly egregious. To an extent I suppose it is a requirement of the supernatural horror film: for a house to be creepy it needs to be large, otherwise every room would be occupied and small and the ghosts would have nowhere to effectively haunt. It still stretches credulity, though, and arguably much more so than the idea that a family could be tormented by ghosts and demons. We know that is just movie fantasy, but real estate prices are very real.

James Wan is one of the more significant figures of American screen horror these days. Most often in partnership with writer/actor Leigh Whannell - they met at university in Australia and have collaborated ever since - Wan has directed a string of hugely successful horror movies beginning with the original Saw in 2004. He subsequently co-produced six sequels in that franchise, as well as directing the likes of Death Sentence, Dead Silence (both 2007), Insidious (2011), The Conjuring, Insidious Chapter 2 (both 2013), and most recently The Conjuring 2 (2016). He has also produced the widely anticipated Lights Out, which is due in cinemas later this year.

Wan and Whannell are filmmakers who have clearly grown up with a deep love for movies, because their films generally seem to act as fresh creative responses to pre-existing works. The Conjuring and its sequel both reflect a number of 1970s horror classic including The Exorcist and The Omen. Saw seems deeply derived from David Fincher's Seven. Death Sentence owes much to Michael Winner's Death Wish. It seems fairly apparent to me that Insidious owes much to Tobe Hooper's Poltergeist. As with their other films, Wan and Whannell takes inspiration from a pre-existing work but absolutely advance their own ideas as well. It is the perfect sort of creative response: showing an appreciation for the filmmakers before them, but adding to the cultural dialogue as well. Here the critical change is a master-stroke: it is not the house that is haunted, but the child himself.

Insidious is a surprising film, as it begins very much as a by-the-numbers supernatural thriller but quickly shifts into much more outlandish fantasy than one might expect. The film's climax is a surreal, otherworldly affair that brings to mind films like A Nightmare on Elm Street. It also balances pretty strong comedic elements alongside the traditional horror jumps and scares: Leigh Whannell and Angus Sampson play a pair of bickering, lighthearted ghost hunters Specs and Tucker. I suspect many viewers will chafe against their overtly comedic performances. Personally I found it was a really nice contrast.

The film's more dramatic performances are well grounded and effective. Rose Byrne and Patrick Wilson play the increasingly frantic parents, with Barbara Hershey playing Wilson's fretful mother. It makes the world of difference to cast strong dramatic actors in horror films, and Wan seems to have a knack for casting the best leading actors available for his films. Byrne in particular gives an excellent performance here as a mother and wife terrified of her family's impending collapse. It is also worth acknowledging Ty Simpkins (Iron Man 3) as

It is interesting to see how heavily Wan's camera work here relies on loose hand-held photography, compared to the more steady and composed feel his other films have. It brings the viewer a lot closer to the characters, and reflects a sort of Halloween-style sense of complicity. To an extent we the viewers are the eyes of whatever unearthly force is tormenting the Lambert family.

The Insidious franchise (there are three films already with a fourth in production) sits rather comfortably alongside Wan's other current series The Conjuring. Both star Patrick Wilson, both deal with ghosts and demonic possession. The main difference is that The Conjuring offers deadly serious supernatural scares with a period setting, while Insidious is open to a much more contemporary, varied take on the same sorts of ideas. I love what Wan is doing, and while he's lately been moving into more action-oriented territory - Fast & Furious 7 in 2015, signing on to direct Aquaman - I really hope he never abandons his horror roots. He is worth too much to the genre to leave it.
Posted by Grant at 5:02 PM