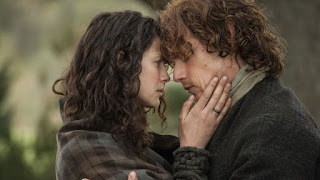 It is 4 April 2015, and time for another episode of Outlander.

Claire (Catriona Balfe) has been captured by English soldiers and taken to Fort William. She is in the process of being sexually assaulted by Captain Randall (Tobias Menzies) when her husband Jamie (Sam Heughan) comes to the rescue. While they successfully escape the English, where does there marriage go from here?

Outlander's first season was divided in the middle by a gap of several months. "The Reckoning" marks the beginning of the second half, and resolves the highly melodramatic mid-season cliffhanger: Randall in the process of assaulting Claire, Jamie revealed in the window, flintlock pistol in hand. It was an odd sort of a cliffhanger in many respects, because Outlander has never been quite so  over-the-top in its episode endings before. It felt remarkably forced at the time. This subsequent episode struggles somewhat to get back to a sense of normality; in fact it pretty much takes the whole hour.

There are a few big problems with "The Reckoning" that stop it from being a particularly good episode. One of them is this weird sense of pulling back from an unwanted, over-the-top cliffhanger. Another is the episode's content in general. It begins in the middle of an assault, which is quite luridly portrayed. Later on Jamie tries to beat Claire with his belt for disobeying his wishes. Further still Laoghiare (Nell Hudson), the girl Jamie was courting back at Castle Leoch, tries to force herself onto him. Later still there's yet another sex scene between Claire and Jamie with a now-typical amount of nudity and gyrating. In the case of the assault it's difficult to sit through, but there's an argument to be made that it should be. In the case of Jamie hitting Claire it immediately makes it much harder to like Jamie. In the case of the sex, it simply feels like titillation to get a certain kind of viewer onboard. Worse still, these are all elements we've seen before. We're only nine episodes in and this episode feels fairly repetitive.

That repetitive sense extends to the plot, which sees Jamie and Claire return with Dougal (Graham McTavish) to Castle Leoch, and Dougal's brother Colum (Gary Lewis). A few episodes ago it felt like a relief to finally get away from Leoch, and now the series is right back there again. It feels a bit like a retrograde step. I can accept the repeated threats of sexual assaults when it's framed by a story moving forward, but it is a lot harder when there isn't a forward-moving story there. With luck the story will pick up again with episode 10, but for now Outlander is disappointing.

I think a key part of why the episode fails is because it is framed from Jamie's perspective. We follow his rescue of Claire, and he narrates the episode in much the same way that Claire narrated most of the previous ones (and it remains a tedious device). One of the greatest strengths of Outlander is how it tells the story from a strong female perspective, and by shifting that perspective to Jamie it looks much of its appeal. Nowhere is this clearer than when Jamie attempts to discipline Claire with his belt. It is framed as comedy, him awkwardly insisting he must do his husbandly duty and Claire oscillating between indignant rage and genuine panic. The perspective and the uncharacteristically male gaze make it an unpleasant scene to sit through.

This is only the second episode out of the nine thus far that I have not enjoyed, so I have hope things will be better in future weeks. For now the quality ratio slips a little to 78 per cent.
Posted by Grant at 7:51 AM