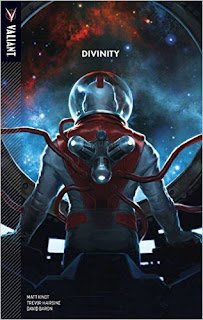 At the height of the Cold War, the Soviet Union sends one cosmonaut  - the orphan Abram Adams - further into deep space than any human being before or since. Now, decades later, he has unexpectedly returned to Earth. He is no longer entirely human. He is unimaginably powerful. Earth's most talented superhumans venture to the Australian outback to contain their mysterious new foe - but he may be too great a challenge for them.

Divinity is a four-issue miniseries by American comic book publisher Valiant. It is a superb book, one subsequently collected by Valiant into an over-sized hardcover book with an extensive appendix of rough designs and process artwork. In fact it is so handsomely packaged that it should service as a model for future collected editions of this type. Everything about it is gorgeous: the design, the layout, the packaging and the art.

Oh the art. Trevor Hairsine's pencils are tremendously detailed, and then accentuated wonderfully by Ryan Winn. Thanks to the appendix it is possible to see just how much each artist contributes to the book's overall look, as does colourist David Baron. This was hands-down one of the most attractive superhero books of 2015, and when collected together it is only more impressive.

Of course all of the attractive packaging and stunning artwork is only worthwhile if it serves a good story. Here Divinity also excels. Matt Kindt has written a complex and thoughtful narrative that gently builds from issue to issue and successfully expresses the experience of one man transformed into something far beyond simple humanity. The book employs a non-linear structure, because its protagonist simply does not seem to live in a linear fashion any more. More than once the book reminded me of Alan Moore's Watchmen, and its treatment of Dr Manhattan. There is a very similar effect going on here: a post-human so advanced that he is struggling to remember his humanity.

The book could easily collapse when the superhero team turns up. Readers unfamiliar with Valiant may struggle initially, as they will have no idea who these characters are. Kindt's script ensure that is not in insurmountable hurdle, however, and certainly the characters are archetypal enough to that it is pretty easy to catch up. Their fight with Adams in the middle of the desert is brilliantly staged and inventive.

On a panel-to-panel basis Kindt's story is extraordinarily well told. It is clear, complex, and deeply effective - the aforementioned fight is an obvious example. In many respects it is telling a very simple, short story, so the added depth and complexity is very welcome. It ends in an open-ended fashion: Valiant are currently serialising a sequel. I am very keen to read it.
Posted by Grant at 9:32 AM