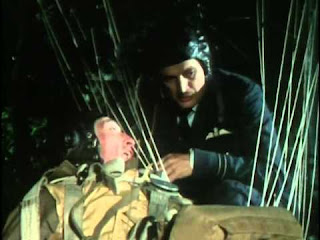 Well at least it is titled Colditz. In turns out that, after failing to reach the titular German castle in the first episode, we do not get there in the second either. Instead we find ourselves in England, where Flight Lieutenant Simon Carter (David McCallum) prepares to set off on a bombing run over Germany. When his plane is shot down, he is stuck far behind enemy lines and is forced to make a run for neutral territory as quickly as possible.

It is immediately obvious what is going on here: just as the first episode spent an hour establishing Captain Pat Grant, and showing how he came to be sent to Colditz this second hour does the same thing with Lieutenant Carter. I would not be surprised to see the third episode follow someone else entirely. Sooner or later the series will reach Colditz Castle, but for now it is concentrating to character development. That is no bad thing - particularly when the episode is as strong as this one is.

It is remarkable how film-like this episode is. Television is generally a dialogue-based medium, and for a broadcaster like the BBC - which always seemed to produce drama on rather limited production budgets - this was doubly true. "Missing, Presumed Dead" really jumps out because it is mostly shot on location and on 16mm film rather than videotape. It gives the entire episode a more glossy, high-budget look than I was expecting.

It is also remarkably short on dialogue. For the bulk of the episode we follow Carter in comparative silence. His plane crashes and he is forced to leave a badly injured co-pilot behind. He tries to get help from a German priest, but gets captured by the Gestapo for his troubles (the priest was already under investigation for hiding Jews). He escapes the Gestapo and gets sent to a prisoner-of-war camp. He escapes from that as well. There is a wonderfully dogged persistence about Lt Carter. He simply refuses to quit trying to escape. There is a strong narrative drive going on here: the episode is focused entirely on Carter, and in turn Carter is focused only on getting back to Britain. The episode's script is by Ian Kennedy Martin, who would subsequently create The Sweeney for ITV.

David McCallum is great, playing Carter as a slightly cold and extremely stubborn man. He refuses to consider his wife and father-in-law's pleas to be re-assigned to a training facility in England, considering his duty to his country and the war effort more important than staying safe at home with his family. He is actively insubordinate to his superiors once captured and sent to a prison camp. McCallum seems like quite a coup for Colditz. He made this series just four years after wrapping work on The Man from UNCLE, which was a huge international hit. From here he jumped to The Invisible Man, and then Sapphire and Steel. Today of course he co-stars in yet another immensely popular TV drama, NCIS. There are not that many actors who star in so many TV dramas over the years.

This is a huge improvement over the first episode of Colditz, offering fewer clichés as well as much harder, more energetic narrative. If the rest of the series is like this I will be enormously pleased.
Posted by Grant at 3:01 PM