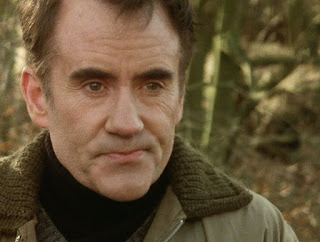 It is 8 October 1979 and time for the fifth episode of Tinker Tailor Soldier Spy.

As George Smiley (Alec Guinness) begins to draw closer to the mole in the Circus, he seeks out retired field agent Jim Prideaux (Ian Bannen) whose capture by Soviet forces in Czechoslovakia brought about Smiley's dismissal from MI6.

We last saw Prideaux screaming with pain and rage after getting ambushing and shot in the back at the Czechoslovakian border. Now he's a visibly traumatised and alcoholic mess, paying the bills by teaching at an English boy's school. Unlike many of the other characters visited upon by Smiley, Prideaux is actually established and effectively showcased well before Smiley arrives. We see his relationship with the students, and the emotional and physical wreck that he has become as a result of his torture and interrogation by the Russians.

Smiley's conversation with Prideaux is markedly different to those he has had with other characters in the series. Whereas previous episodes would use the scene as an excuse to launch into a flashback, here we simply stick with Prideaux as he talks. It puts a lot of pressure onto Ian Bannen's performance, but he and director John Irvin skilfully keep the viewer's attention throughout. In many ways - and I suspect this was the reason no flashback was filmed - hearing Prideaux describe his ordeal is more confronting that actually seeing it. It is a testament to the skill of the cast and the writers - both Le Carré as author and Arthur Hopcraft as script writer - that the episode never seems dull and never stops being an entirely gripping experience.

Ian Bannen does a marvellous job as the broken Prideaux, jumping from anger to guilt to resentment and back again. Le Carré's novel begins with Prideaux in exile at the school, and weaves his story throughout the book. Here Hopcraft jams all of that material into one episode. It is a clever strategy, giving Bannen the opportunity to express the character all at once and really allow the story to focus on the character.

Before meeting with Prideaux, Smiley heads off to a conversation with yet another disgraced and fired Circus employee: Sam Collins (John Standing), the duty officer who received the transmissions that Prideaux had been shot and captured during Control's failed final operation. Unlike the Prideaux scenes this one does drop back into a flashback, and provides valuable information for Smiley's investigation. By the end of the episode it seems very likely that Smiley's list of four potential moles is down to two. It is surprising to see things narrowed down so quickly.

This is a particularly strong episode for Tinker Tailor Soldier Spy, one that benefits from a close focus on one character as well as much more assured narrative structure with a beginning, middle and end. In terms of how the series has progressed overall, it has been fascinating to watch the story unfolds very much in a forensic fashion: everything has already happened, but it is up to Smiley to slowly tease out the who and the how of it. It is a remarkable method with which to develop a drama, which it does with great success.
Posted by Grant at 3:50 PM