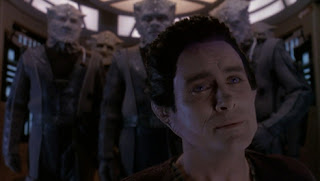 After a group of rogue Jem'Hadar make a surprise attack on the station, Captain Sisko (Avery Brooks) is forced to temporarily unite with the Dominion to track the rogues down and stop them from taking control of an Iconian gateway.

"To the Death" is very much less than the sum of its parts. On the one hand it provides a fresh perspective on the Jem'Hadar and their culture, it introduces a new recurring character who will prove to be a fan-favourite, it brings back a story element from Star Trek: The Next Generation, and it continues the long-running story arc regarding Odo's angst-ridden relationship with the Founders of the Dominion. On the other hand it simply comes up a little ordinary. There is nothing here that grabs the attention enough to make the episode worthwhile, and too much of it feels like things we have seen many times before.

To its credit the episode makes quite an impact in its early scenes. The sight of an entire pylon of Deep Space Nine blown to smithereens is a powerful one, as is the sight of an injured Kira (Nana Visitor) consoling Quark (Armin Shimerman) that his brother was not among the casualties. From there, however, it quickly turns into a typical story about Federation officers having to team up with a militaristic alien culture to achieve a common aim. There is a climax, which has plenty of action but is rather unimaginative and brief, and by the episode's conclusion it does not feel as if anything anything has changed or been learned.

Worf (Michael Dorn) gets into a few scraps and altercations with the Jem'Hadar brought onto the Defiant, but it feels like the writers have simply written Worf to a stereotype. It would have been much more interesting to see the manner in which Worf differs from this warrior culture than the ways in which he is almost the same. Other regular cast members thankfully get some better material, notably Odo (Rene Auberjonois) and Dax (Terry Farrell). For Odo it is a matter of discomfort that the Vorta and the Jem'Hadar seem to treat him like a mythological figure. For Dax there is a nice pair of conversations with one particular Jem'Hadar about age, experience and culture. O'Brien (Colm Meaney) comes along for the ride, but to be honest there is no narrative need for him to be there and as a result no interesting material with which Meaney can work.

The use of the Iconian gateway, last seen all the way back in the Next Generation episode "Contagion", is a bit of a head-scratcher. It is an almost wilfully obscure reference, treated by this episode as information that the general audience would immediately have to hand. Even I was struggling to remember precisely who the Iconians were and what happened the last time their mysterious gateways featured.

It is a pleasure to Jeffrey Coombs appear as Weyoun, the Vorta commander of the loyal Jem'Hadar troops. He creates a marvellous character here, capable of broadly smiling and being polite while simultaneously showing a scathing contempt. He is written out here remarkably suddenly, but his performance was so popular with the production team that they went through a remarkable contortion to bring him back in future seasons.

In the end this episode is not engaging enough for a viewer to bother watching it. The elements are almost there, but a few odd choices - re-using the Iconians, basically - and some very stereotypical story and character really let it down in the end. 13 good episodes out of 22 leave Season 4 with a quality ratio of 59 per cent. It has not escaped my notice that despite a few real stand-outs this fourth year of Deep Space Nine is showing a real slip in quality from the previous three. It has three more episodes left with which to improve.
Posted by Grant at 6:07 PM