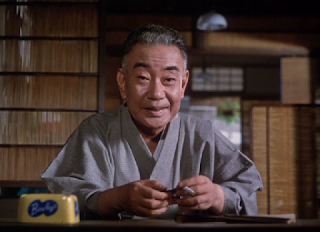 For international audiences it is generally thought that Akira Kurosawa is Japan's greatest-ever film director. In Japan, however, the overwhelming consensus gives that honour to Yasujiro Ozu. Between 1927 and his death in 1962 Ozu directed numerous comedies and dramas, each of which seemed to perfectly capture the changing landscape of Japanese domestic life. His films are tonally and visually distinctive, making extensive use of low static camera angles, direct address to camera, and rigid geometric editing.

The low angles made sense, since his films were almost universally set inside traditional Japanese homes. The camera sits inevitably at the height of an observer sitting upon a tatami mat, giving the viewer the sense of sitting in the room and observing the action. Ozu also disliked excessive drama, and was known for cutting entire scenes out of his films if he felt they were making events feel too melodramatic. He also regularly broke his scenes up with what the critic Nöel Burch called "pillow shots": small triptych sequences dividing moments in time that would give an abstract sense of place or emotion. The much-vaunted "180 degree rule", in which camera angles from one edit to another must generally point to the one side of a room, Ozu freely ignored.

His films thus have a very specific and somewhat peculiar aesthetic to them. They, along with his subject matter, are very specifically Japanese in flavour, and that likely explains why Japanese audiences embraced him so firmly while American audiences in particularly went for the more Westernised Kurosawa. Critics, it must be said, have been much more forward in embracing Ozu's work. Sight & Sound, the BFI's monthly film magazine, runs a periodic poll of critics and directors on the best films of all time. Their most recent poll, published in 2012, voted Ozu's Tokyo Story the greatest feature film of all time.

The End of Summer, released in 1961, was Ozu's penultimate film. It also works as an excellent example of the tone, subject matter and technique that he employed throughout his career. The film focuses on the extended Kohayagawa family, who live in Kyoto and operate a family-owned sake brewery. Family patriarch Manbei (a delightfully mischevious Ganjiro Nakamura) has taken up with an old lover, causing much consternation among his children - particularly his prickly daughter Fumiko (Michiyo Aratama). Conflict builds within the family as Manbei's secret trysts are revealed, and his growing inattention towards the struggling brewery becomes gradually untenable. At the same time Manbei is pressuring his other daughter Noriko (Yoko Tsukasa) and his widowed daughter-in-law Akiko (a typically radiant Setsuko Hara) to settle on a pair of arranged marriages to alleviate pressure on his own finances and set them up for life after he has died.

It is a typically calm sort of story, told mainly in quiet conversations between family members. There are quite a lot of characters with whom to become acquainted, and that makes the film's first twenty minutes or so a little confusing. Once it settles down, this fascinating family drama becomes a fascinating and gentle experience. There is a powerful sense of transition across the entire film, one that contrasts differing lifestyles and attitudes between the younger and older characters. Some characters walk around in traditional Japanese clothing while others actively wear western outfits. Both Akiko and Noriko struggle over whether to side with tradition and accept their arranged marriages, or strike out and seek happiness on their own terms. As patriarch Manbei is not getting any younger, and a heart attack partway through the film gives everyone a sudden, ominous reminder of human mortality. Things change and end, and to a large degree that sense of passing time is the focus of the film. It is reflected in the title, whether in English or in Japanese - where it is translated as Autumn for the Kohayagawa Family.

This is a slow, thoughtful and ultimately quite wonderful drama, rich in Japanese culture and told in Ozu's distinctively calm and measured fashion. It does take a short while for its tone and style to click into place for a viewer more familiar with American-style film-making, but once it is in place it is a wonderful experience.
Posted by Grant at 7:24 AM