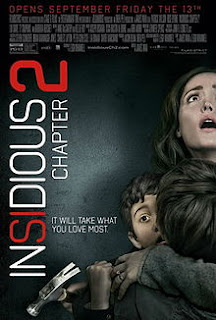 Following their harrowing supernatural encounter, Josh (Patrick Wilson) and Renai Lambert (Rose Byrne) have moved their family in with Josh's mother (Barbara Hershey) while the police investigate their house. It soon becomes clear that the spirits that tormented them have not gone away, and that Josh is started to act badly out of character.

Insidious Chapter 2 continues on directly from the conclusion of the original Insidious, but tonally speaking it feels like a quite different kind of horror film. To be completely honest it is a bit of a hot mess, where a story continues not because there is more to say but because commercial considerations demand it, and where the genre shifts weirdly into really unexpected and, to be honest, fairly uncharted territory. In some ways it reminds me of John Boorman's The Exorcist II, which went in a wildly off-the-wall direction that was quite difficult to comprehend. Now Insidious Chapter 2 is nowhere close to the colossal misfire that Boorman directed, but it is certainly a somewhat substandard and confused film compared to its predecessor.

From its opening scenes the film pretty much divides into two parallel storylines. In one, Renai begins to see apparitions and poltergeist activity in her mother-in-law's house, yet Josh is aggressive in demanding she move on and stop worrying about it. In the other, Specs (Leigh Whannell) and Tucker (Angus Sampson) begin searching through the late Elise's (Lin Shaye) house and stumble upon the video recording of Josh's childhood encounter with the supernatural. While both threads follow directly from Insidious, one becomes a home invasion thriller and the other a sort of forensic investigation into a serial killer. Both unite by the climax, but it is a weird and shaky road in getting there.

By the time the film hits its extended climax things get really strange, with what I'm pretty sure is the first use of time travel in a supernatural horror film. It is a pretty ballsy move, all things considered, and results in some of Chapter 2's strongest material, but I imagine it is a pretty divisive move for an audience likely anticipating more of the same straight ghostly thrills. I applaud Whannell and Wan's bravery in introducing such a twist, since it's a genuinely original idea that is both unexpected and clever. It reminded me slightly of Saw IV, which featured a different sort of narrative twist but resulted in my dame reaction: surprised delight.

Despite this inventive shift, Insidious Chapter 2 lacks the energy and spark of the original film. It feels quite unnecessary: we didn't need to see what happened next, and there is a weird sense that the production team knew that as well. While everything pulls together by the end, the film's first half has a tendency to test one's patience a little. The performances are great - particularly by Patrick Wilson, who has to slowly undergo a transformation in personality over the course of the film - but everyone is working with lesser material than they deserve.

I continue to adore Specs and Tucker, and would quite happily see the franchise continue or spin off to focus solely on their investigations. There's a real Australian sensibility about their humour, including pretty much the most sensible reaction to a ghost in movie history. ('If you're caught in here,' a dead girl tells them, 'I'll have to kill you.' They quietly stand and back out of the room.) A glance ahead shows that they return in Chapter 3, so hopefully my desires will be fulfilled in due course.
Posted by Grant at 7:09 AM