The West Wing: Aaron Sorkin and The American President 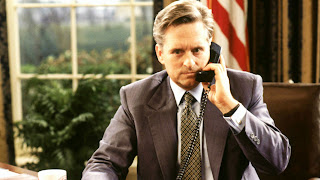 The success of A Few Good Men established Aaron Sorkin's working relationship with Castle Rock, and Malice cemented it. Malice was released by Castle Rock in October 1993. After completing work on A Few Good Men Sorkin had managed to do one more dialogue rewrite over Scott Frank’s final draft. Sorkin’s talent for crafting memorable monologues is evident in the final film, with Alec Baldwin’s ‘I am God’ speech standing as the highlight of the entire production. The film was directed by Harold Becker, whose previous movies included Taps and Sea of Love. Its domestic box office was a healthy US$46 million dollars, further securing Sorkin’s position as a screenwriter of note.

Sorkin’s skill with dialogue also earned him several contracts as a “script doctor”, reworking and polishing other writer’s screenplays before they entered productions. Films that benefited from his work during the 1990s included Schindler’s List, The Rock, Enemy of the State, Excess Baggage and Warren Beatty’s Bulworth. Sorkin also developed an original screenplay for Beatty: Ocean of Storms, an astronaut drama that was ultimately shelved following the release of Clint Eastwood's similar Space Cowboys.

The final screenplay that Aaron Sorkin wrote for Castle Rock was the romantic drama The American President, again directed by Rob Reiner. It would have an enormous influence on The West Wing's creation: had the former not existed, the latter would never have been created.

During the writing process of The American President Sorkin became addicted to freebasing cocaine. Holed up in a New York hotel room, Sorkin worked on his screenplay for almost two years.

The American President is an unashamed romance, combining equal amounts of drama and comedy in a gentle fashion, and set against the intriguing backdrop of the United States Presidency. Sorkin and Reiner researched the film together, including making more than one visit to the real White House. With research in hand, Sorkin crafted the story of widower President Andrew Shepherd (Michael Douglas) who tentatively begins a relationship with Washington lobbyist Sydney Ellen Wade (Annette Bening).

The average feature-length screenplay runs to about 120 pages – roughly one page per minute. Particularly long scripts, such as Schindler’s List (upon which Sorkin worked), can run as long as 180 or 190 pages. When it was finally delivered to Castle Rock, Sorkin’s draft of The American President ran to 385 pages. Sydney, the female lead, was not even introduced until page 90. The screenplay was extraordinarily heavy with dialogue – a Sorkin trademark. ‘I don’t have stories to tell,’ he later explained, ‘I really don’t. I’m desperate for stories to tell. What I love is the sound of dialogue and the music of dialogue. It’s what I like to write.’(3)

With Reiner’s help, the 385-page draft was ruthlessly pared back to 120 pages. This was still fairly long by romantic movie standards, but short enough for shooting to commence. As with A Few Good Men, a wide array of talented actors were keen to work with Rob Reiner. These included the aforementioned Douglas and Bening, as well as Michael J. Fox, Samantha Mathis and Richard Dreyfuss as Republican Presidential candidate Robert Rumson.

There are several cast members of particular interest to West Wing fans. Anna Deveare Smith would later play the recurring role of National Security Advisor Nancy McNally, Joshua Malina appears in a minor role, as does Nina Siemaszko – who would later play Ellie Bartlet. Most obvious of all is Martin Sheen, playing A.J. McInerny, President Shepherd’s Chief of Staff. Returning to The American President after seven seasons of The West Wing, it is pointedly surreal to watch Martin Sheen in the same setting, with similar dialogue and storylines, but playing someone completely different.

The sets for The American President were hired from Warner Bros Pictures, where they had been originally constructed for the Ivan Reitman comedy Dave in 1993. A year after The American President they would be re-used again, this time for the Robert Zemeckis science fiction drama Contact. By 1999 the sets were in the hands of Warner Bros Television, where they formed the basis for the extensive and complicated sets of The West Wing itself.

The American President was released in US cinemas on 17 November 1995. It grossed a domestic total of roughly US$60 million dollars. Combined with about US$40 million in international sales, it ultimately grossed roughly US$100 million dollars – not an enormous hit but hardly a failure either. Critics delivered polite acclaim, but few seemed particularly enthused. Seen in isolation The American President is a perfectly pleasant and charming romantic drama. The dialogue sparkles, the performances are engaging, and it deftly combines domestic and light-hearted romance with political issues and – more intriguingly – political process. Seen in the shadow of The West Wing it is an intriguing “proto-pilot”, testing out directions as it goes and revealing numerous avenues for exploration – not only in narrative but also in character, detail and social issues. While Sorkin had not even considered the possibility of a television series at this stage, its potential is – in retrospect – very obvious.

During the writing process of The American President, Sorkin’s addiction to crack cocaine was spiralling out of control. In late 1995 he voluntarily entered rehab at Minnesota’s Hazelden Institute.