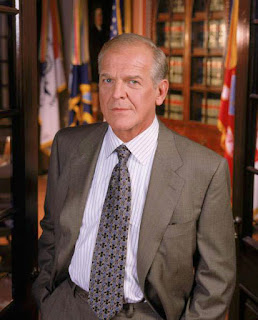 Previous instalments of this blog series have covered the casting of three of the seven original lead characters in The West Wing. Today we cover the remaining four. An eighth regular character, Charlie Young (played by Dule Hill), was not cast until the series was underway.

Aaron Sorkin wrote the role of Leo McGarry, Bartlet’s Chief of Staff, with actor Judd Hirsch in mind. The character’s original name was Leo Jacoby. While Hirsch was the top choice going into the auditions process, Sorkin and Wells remained open to other possibilities.

John Spencer auditioned for the role with enthusiasm. ‘I thought, “I gotta do this”,’ he told the Washington Post, ‘I chased the role.’(1) Spencer was born John Speshock in New York in 1946. He made his television debut in 1963, appearing on The Patty Duke Show. He then didn’t appear on screen for 13 years, returning in a pair of episodes of Ryan’s Hope. A string of small parts followed in a variety of films and TV programs: Wargames (1983), The Protector (1985), Miami Vice (1986), Spenser: For Hire (1986) and Black Rain (1989). In 1990 he was cast a lawyer Tommy Mullaney in the popular prime-time drama L.A. Law – he remained in the role for four seasons, leaving in 1994.

John Spencer’s audition for Leo impressed the producers so much that they cancelled all other auditions and offered him the part.

The character’s name was changed from Jacoby to McGarry to better suit John Spencer’s appearance and performance style. Like his co-stars, Spencer engaged in research to better understand the White House environment and the pressures his character was likely to be under. ‘Aaron gave me a book, the writing of five different chiefs of staff, and I read it before we started the pilot after I’d been cast. And way after the face, into our first season, I met John Podesta. And I’m just crazy about him. He’s a great fellow.’(2) 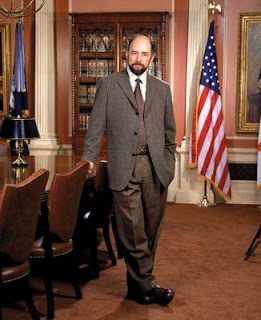 Richard Schiff was cast as White House Communications Director Toby Ziegler, narrowly beating comedic performer Eugene Levy to the part. Born in Maryland in 1954, Schiff studied theatre at the City College of New York. Following is graduation in 1977 he directed several off-Broadway plays (including a staging of Antigone starring Angela Bassett) before shifting into acting. His on-screen debut was as a deli clerk in the 1987 film Arena Brains. Other early performances include the films Young Guns II, Stop or My Mom Will Shoot, Rapid Fire and Speed. In 1995 he played a small by crucial role in David Fincher's serial killer thriller Seven. The 1990s also saw Schiff make guest appearances in a string of television comedies and dramas, including Doogie Howser MD, ER, Picket Fences, Murder One, L.A. Law, High Incident and NYPD Blue. It was after seeing Schiff's performance in High Incident that Steven Spielberg cast him as Eddie Carr in 1997's The Lost World: Jurassic Park.

Schiff’s melancholic, prickly performance as Toby was – for some viewers – a highlight of the series. He later said: ‘Had I known that we were going to go on for seven years I might have picked a cheerier guy. [...] The only thing I could imagine was the absolute burden, the tons of weight that you must feel with the burden of the future history of the world on your shoulders. People’s lives are affected and that’s what I felt more than anything, that if I was in that job I would really have to wonder about the consequences of my actions. That made a very complex character.’(3) 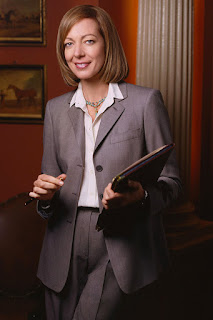 Several actors were short-listed for the role of White House Press Secretary Claudia Jean “C.J.” Cregg, including Allison Janney, CCH Pounder and Janel Maloney. Richard Schiff recalled: ‘I saw Allison Janney in the auditions and I thought if she ends up being cast in this show then I am pretty sure these guys know what they’re doing, and that turned out to be the case.’(4)

Allison Janney was born in Dayton, Ohio, the daughter of former actress Macy Putnam and jazz musician and real estate developer Jervis Spencer Janney Jr. After completing school at Miami Valley School in Dayton and Hotchkiss School in Connecticut, Janney studied theatre at Kenyon College. One of her instructors was actor Paul Newman. She later studied at the Neighbourhood Playhouse in New York (alongside Dylan McDermott) and the Royal Academy of Dramatic Art in London. Janney was informed during her studies that, at six feet, she was far too tall to succeed as an actor. Her on-screen debut came in the 1989 film Who Shot Patakango?, playing the role of Miss Penny. She later appeared in Morton & Hayes (1991), The Guiding Light (1992) and Law & Order (1994), which she gained positive notices playing a mob informant.

Over the ensuing years Janney built a strong resume in motion pictures, with her roles increasing in size and stature. Her films include The Cowboy Way, Wolf, Miracle on 34th Street, Walking and Talking, The Associate, Private Parts, The Ice Storm, Primary Colors, The Object of My Affection and Woody Allen’s Celebrity. In 1998 Janney was nominated for a Tony Award for her performance in Arthur Miller’s A View From the Bridge. The following year she was seen in prominent roles in three films: Ms Perky in 10 Things I Hate About You, Loretta in Drop Dead Gorgeous, and Barbara Fitts in Sam Mendes’ Oscar-winning drama American Beauty. When Allison Janney was offered the role of C.J. she was still shooting American Beauty.

Ultimately Janney was taken out to dinner by former White House Press Secretary Dee Dee Myers, who explained the nature of the position to her and what sort of things C.J. would likely encounter. ‘She told me that, as press secretary, your relationships aren’t determined by the boundaries of your job. It’s by who likes you.’(6)

Speaking about the role of C.J. in 2009, Janney said: ‘She was so damn good at her job and yet she didn’t lose her femininity. She was in the boys club and holding her own. You admired and respected her. She made you laugh. She made you cry. You felt like you could know someone like her. She was a real character.’(7) 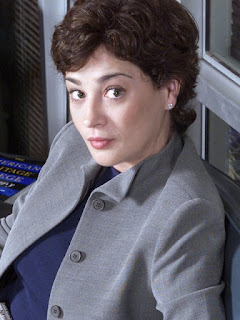 As Josh’s former girlfriend – and new White House media adviser – Madeline “Mandy” Hampton, the producers cast Moira Kelly. Moira Kelly was born in Queens, New York, in March 1968. She made her on-screen debut as Cinnamon Brown in the TV movie Love, Lies and Murder. Kelly’s career developed relatively quickly with a string of noted film roles. ‘I was enrolled in Marymount,’ she later recalled, ‘part of the theatre program there, and just after my senior year I did an audition for my agent... and they signed me. I had never anticipated film work; I always thought I would do stage work in the plays on Broadway. But he said, “What about film?” and I said, “Well let’s go out on some auditions” and it took.’(8)

Kelly’s film roles included Becky in Billy Bathgate, Donna Hayward in Twin Peaks: Fire Walk With Me, Hetty Kelly in Chaplin and Courtney Blumenthal in With Honors. She was actually cast in one of the leading roles of Penny Marshall’s 1992 hit A League of Their Own, but an ankle injury sustained while shooting The Cutting Edge forced her pull out. She was replaced by Lori Petty. In 1994 she voiced the role of Nala in the Walt Disney animated feature The Lion King. In 1998 she played the role of Annie Cornell in the short-lived television series To Have and To Hold.

Of her character, Kelly said ‘Madeline Hampton is a really smart woman who can get the job done. She’s really, really intelligent. And that intelligence makes her comfortable in a man’s world. She’s really sexy and very intuitive. Also a little whimsical. Also, she has a big heart, and that gets in her way.’(9)

With the principal cast signed with literally a day to spare, shooting was ready to commence on the West Wing’s pilot episode.