The West Wing: "The Crackpots and These Women" 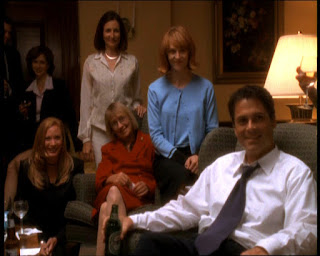 In “The Crackpots and These Women”, Leo McGarry’s pet project sees C.J. talking about wolves and Sam talking about UFOs. Meanwhile, Josh receives a security card with big implications for his future – and his peace of mind. Finally the President’s youngest daughter Zoey arrives at the White House.

At the episode’s opening we are introduced to “Big Block of Cheese Day”, Leo’s appointed day where groups and organisations usually unable to get an audience with Presidential staff are invited into the White House, and their proposals, issues and grievances are heard. It's named, according to a speech already mocked by Leo's staff, after a day when President Andrew Jackson received an enormous block of cheese and chose to share it with the people of Washington.

Believe it or not, Andrew Jackson really did have a big block of cheese. It weighed two tons and sat in the White House foyer for two years between 1837 and 1839 before Jackson cut it open for a well-attended public cheese tasting. This is one of the reasons I love The West Wing. You're never going to learn a weird moment of history like that watching Stargate Atlantis.

During the 1999 Big Block of Cheese Day C.J. meets with conservationists wanting to build a $100 million dollar wolves-only expressway, while Sam has an odd conversation with a creepy man about UFOs. Both scenes are played as comedy, giving “The Crackpots and These Women” the lightest tone of all West Wing episodes thus far. Allison Janney’s increasing incredulity as C.J. is told about the wolves expressway is particularly funny.

As with previous episodes Sorkin does provide a contrast. Here Josh undergoes a personal crisis after he is given a security pass for his evacuation in the case of a nuclear attack. When he discovers that it is only he personally as Deputy Chief of Staff who has such a card, and all of his co-workers and friends are to be left behind, he begins spiralling into a mess of angst and guilt. In many ways this is the episode that sets up Josh's character for the rest of the series. We've already been introduced to his brash political style and his ability to fly recklessly off the handle (seven years later Bruno Gianelli will describe him as having ‘the political equivalent of Tourette’s Syndrome’). Here those initial traits are coupled with self-doubt and repressed guilt, revealing Josh as - even at this early stage of the series - a troubled and emotionally conflicted man. Sorkin builds on this facet extensively during the show's second season, as we shall later see.

The evacuation card subplot was based on a conversation Sorkin once had with Clinton advisor George Stephanopoulos. Stephanopoulos showed Sorkin the exact same card, giving him instructions on what to do and where to go if the USA suffered a nuclear attack. During production Dee Dee Myers informed Sorkin that the subplot was based on a fallacy – emergency evacuation cards weren’t actually real. It turned out that they were, but during her tenure in the White House Myers had never been given one.

Guy Boyd played Dr Stanley, Josh’s psychiatrist. Best known for his performance as Detective McLean in Brian De Palma’s Body Double, he had also appeared in Robert Altman’s Streamers – as well as a string of various TV episodes. Curiously, Dr Stanley doesn’t appear in The West Wing again – the next time Josh speaks to a psychiatrist onscreen it is with Stanley Keyworth (Adam Arkin) in “Noël”.

Josh’s storyline is yet another example of Aaron Sorkin developing his characters as he writes. Interviewed in 2002, Bradley Whitford said ‘I really do wait for Aaron to tell me about Josh. We were a year and a half into the series when I did an episode in which I talk about my sister dying in a fire when she was babysitting me, but I had run outside. I realised, “Oh, I’m a guy whose sister died when she was 16”. There’s a lot we don’t know about our characters, that we establish as we go along.’(1)

The music that Josh listens to near the end of the episode is the “Ave Maria” composed by Franz Schubert and performed by Marian Anderson. It’s in this episode that we meet the first of Jed Bartlet’s three daughters. Zoey is Bartlet’s youngest child, and is introduced partly as a romantic foil for Charlie Young and partly to show how having a child start college would affect the President. John Wells said ‘we picked Georgetown because Bartlet is Catholic and Georgetown is a great university and a great place to send her to school in our fictional world.’(2)

Zoey Bartlet was played by Elisabeth Moss. Moss was born in Los Angeles in 1982. She started her acting career at the age of six, in the Jackie Collins miniseries Lucky Chances. From 1992 to 1995 she made occasional guest appearances in Picket Fences as Cynthia Parks. In 1993 she voiced the role of Michelle in the animated feature film Once Upon a Forest. During this period Moss also trained at the School of American Ballet in New York, and at the Kennedy Centre in Washington D.C. ‘It took all the pressure off of auditioning for acting roles,’ she later said. ‘If I didn’t get a job, I just went on dancing. It saved me from becoming that 9-year-old who has everything riding on getting that one part. We all know that 9-year-old, and she’s not a pretty picture.’(3)

Moss’ other film and television roles include Gypsy (1993), episodes of Batman: The Animated Series and Animaniacs (1993), The Last Supper (1995), Escape to Witch Mountain (1995), A Thousand Acres (1997), Anywhere but Here (1999) and Girl Interrupted (1999). Moss was called in to audition for the part of Zoey three times. She was already known to the episode’s director, Anthony Drazan, who had directed her in the film Imaginary Crimes in 1994. Aaron Sorkin was particularly impressed with Moss’ audition, later noting ‘she was special. She's a very honest actress. She doesn't pose. She doesn't do a voice.’(4)

Speaking in 2009 about her experience on The West Wing, Moss said: ‘Well, it's a very liberal show, but it was more that - it was a very smart show. I was probably formed more by the intelligence of it than the politics. The writing was so smart and spot-on. When you have writing like that, you almost don't have to do anything, so I felt I was influenced more creatively.’(5)

Playing the role of UFO nut Bob Engler is Sam Lloyd. Best known as Ted Buckland in the medical sitcom Scrubs, Lloyd has played a variety of comic roles in film and television, including Dr Albert Goodfine in Desperate Housewives, as well as episodes of Mad About You, The Drew Carey Show, 3rd Rock from the Sun, Spin City and Two Guys, a Girl and a Pizza Place. Bob Engler would return in Season 4’s “The Two Bartlets”.

The so-called “Pluie Crackpots” who met with C.J. were played by Nick Offerman (Jerry), Nicholas Cascone (Loomis) and Rachel Singer (Marge, but credited as “Pluie Crackpot”). Today Nick Offerman is best known for the role of Ron Swanson in the TV comedy Parks and Recreation. In 1999 his career was in its early stages, comprising walk-on and small speaking roles in the likes of ER, the Nicolas Cage film City of Angels, Arli$$ and Profiler.

Nicholas Cascone has appeared in small guest roles in a variety of TV shows and films dating back to the mid-1980s, including Matlock, Highway to Heaven, Moonlighting, Star Trek: The Next Generation and Star Trek: Deep Space Nine, L.A. Law, Titanic and ER.

Rachel Singer is best known for the small but pivotal role of Chloe, the cancer patient desperately craving sexual intercourse in David Fincher’s 1999 film Fight Club. She has also appeared in 8mm, The Green Mile, ER, What Lies Beneath, Joy Ride, Moonlight Mile and Carnivale.

So much for the crackpots, what about “these women”? There is an odd moment in the episode’s final minutes, where Leo and Jed praise the many virtues of the female staff around them: C.J., Mandy and Mrs Landingham. It feels like it could be a positive scene, showing off The West Wing’s brilliantly capable female characters. Unfortunately, coming from two middle-aged men laughing at a party, it seems a little condescending at best – and outright sexist at worst. It’s a moment that simply doesn’t work, or at least fails to work in the manner it seems intended. The tone is so wrong.

Director Anthony Drazan had previously directed the films Zebrahead (which won a string of film festival awards – including the coveted Filmmakers Trophy at the 1992 Sundance Film Festival), Imaginary Crimes and Hurlyburly, which starred Sean Penn. Following “The Crackpots and These Women”, his only directorial credit has been the made-for-TV film E.D.N.Y., which he also wrote.

For the basketball scene at the episode’s opening, permission was granted for the production to set up a hoop in front of the White House on Pennsylvania Avenue. For Rob Lowe the experience of playing basketball against Martin Sheen brought back a lot of memories – he used to play basketball with Sheen’s sons Charlie Sheen and Emilio Estevez when he was a teenager. ‘I spent my summers swimming in his pool and playing ball in his backyard,’ he told the Calgary Sun, ‘I remember all those times I’d feel frustrated because he could beat me on the basketball court with his 1950s’ hook shot.’(6)

During the basketball scene Toby is wearing a sweatshirt from the Community College of New York. Richard Schiff is a graduate of CCNY, and wore the sweatshirt after it was sent to him by the university. Professional basketballer Juwan Howard played ring-in player Rodney Grant during the teaser sequence.

Shortly after this episode was produced, key members of the cast and crew were invited to visit the actual White House. Richard Schiff said ‘the first time I was in the Oval Office was after a night of shooting on Pennsylvania Avenue - we were shooting a basketball sequence and I re-injured my busted up knee, and so when we went into the Oval I was on crutches. Our set was designed as an exact replica of Clinton’s Oval, and those striped couches on the set were where we took our naps, so when I went into the Oval on crutches, and in pain, I had to fight every urge just to pop down on that couch.’(7)

“The Crackpots and These Women” was one of the episodes submitted by NBC and Warner Bros to the Emmy Awards, for consideration as Outstanding Drama Series – a category The West Wing won.