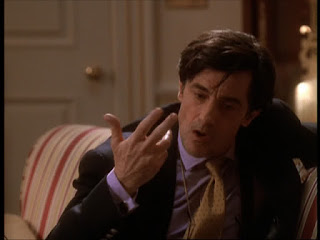 Comedy and drama mix in their usual fashion in this 11th episode of The West Wing, as India invades Kashmir, Josh learns the real target of Claypool's investigation into White House drug abuse, and the United Kingdom gets a new ambassador to the USA.

According to Patrick Caddell, who is co-credited for both the story and teleplay of “Lord John Marbury”, former Secretary of State Madeleine Albright said this episode was one of the best expositions on foreign policy on television that she had ever seen.(1)

The episode is based on a very real tension that exists in the Kashmir region between India and Pakistan. Once again The West Wing draws a real-life issue from the headlines and presents it in a digestible manner for a mass audience. If you didn’t know about military tensions between India and Pakistan before, after “Lord John Marbury” you’re working from a very solid foundation. In fact, in a rare case of a television drama being a little too much on the money, India actually invaded Kashmir two weeks after this episode went to air in the USA.

To help negotiate between the Pakistani and Indian governments, Bartlet calls in British diplomat – and eccentric drunkard – Lord John Marbury. Roger Rees’ portrayal of this bizarre aristocrat is the highlight of the episode. Born in Wales, Rees started his career playing small parts in the Royal Shakespeare Company, before working his way up the ranks to become one of the company’s lead players – winning an Olivier and Tony award in 1982 for his performance in The Life and Adventures of Nicholas Nickleby. A television broadcast of the play earned him an Emmy nomination. While primarily working in the British and American theatre, Rees has made a number of appearances in film and television. He played Aram Nicholas in Star 80, Malcolm in the short-lived 1988 TV series Singles, Robin Colcord in 17 episodes of Cheers and the Sheriff in Robin Hood: Men in Tights. Subsequent to The West Wing Rees has appeared in The Pink Panther, Grey’s Anatomy, The Prestige and Elementary.

Lord Marbury would return in “He Shall, From Time to Time...”, “The Drop In”, “Dead Irish Writers” and “The Wake-Up Call”. He is an odd character, and he doesn’t sit outrageously well with the largely realistic yet earnest reality that has been developed for The West Wing. He speaks what The Times’ Jasper Rees described as ‘an American scriptwriting consortium’s notion of what an advantaged English might be.’ Roger Rees himself noted, ‘I had to say, “How are you, old sock?”.’(2) Despite this, there is something innately likeable about Marbury – it’s as if the series is willing to make a little fun of itself. Further fun is had in Ed and Larry’s half-formed presentation on India and Pakistan to the senior staff – having researched it with a copy of the Encyclopaedia Britannica.

On a more serious and dramatic level, Josh is subpoenaed to testify in the congressional investigation into White House substance abuse. His anger when he realises Leo is the target is palpable - the father-son dynamic between the two is further established, and well cemented. (And, of course, gets an ultimate and heartbreaking payoff in Season 7.)

John Diehl played Larry Claypool, who would return for a second appearance in 2002’s “Holy Night”. Born in Ohio in 1950, Diehl was a familiar – if not famous – face for most television viewers. As well as playing Hawaiian shirt-wearing Detective Larry Zito in three seasons of Miami Vice, Diehl had also co-starred in Escape From New York, Stargate, Nixon and Stripes. Following his appearance here Diehl guest starred for eight episodes on The Shield (as Ben Gilroy), as well as appeared in Jurassic Park III and Point Pleasant.

As the events play out, C.J. finds herself in the position nearly all press secretaries find themselves in at one point or another: denying something is happening to the media, only to subsequently learn that it was happening and he/she had simply been cut out of the loop. Here C.J. isn’t told about India invading Kashmir, and unwittingly goes on to ridicule a reporter who’s been leaked the same information she has been denied. It is an upsetting insight into the life of the White House Press Secretary.

‘I think it happens to every press secretary,’ said Dee Dee Myers, who advised Sorkin and the writing team on this storyline, ‘it certainly happened to me.’(3) In January 1994, following an assassination attempt on former President George H.W. Bush, Myers told reporters that the FBI was still looking into whether or not Saddam Hussein was involved – and that the FBI would eventually submit a report to the President. The very next day the US military bombed Baghdad – Clinton having received, read and responded to the FBI report without Myers’ knowledge.

‘I tend to take up what my characters are going through,’ said Allison Janney, ‘and I felt really angry. I said how can you do this to her? I sort of wish there would be some backlash from that, and also I hope it would carry through to the next – what it’s like to go into the press room after having that happen.’(4)

Finally, Charlie asks Bartlet's permission to date his daughter, which is in turns funny, touching and very sweet. Another father-son dynamic continues to form – and an important story arc for the second half of the season begins to develop.

The episode was directed by Kevin Rodney Sullivan, best known for directing the films How Stella Got Her Groove Back and Guess Who. His other credits include episodes of 30 Rock, Lincoln Heights, The Guardian, Ed, Fame and Night Court. Prior to working as a director Sullivan had worked as an actor, appearing as John Gant in The Adventures of Buckaroo Banzai, March in Star Trek: The Wrath of Khan, and in the recurring role of Tommy in Happy Days.

In the final analysis, “Lord John Marbury” proves a difficult episode to assess. Its dramatic parts are gripping and effective, and it’s comedic parts and funny and irreverent. It is the point at which these two halves intersect that proves problematic. It seems one of those cases where the quality of the individual parts exceed the quality of the work as a whole. Some of the storylines feel slightly short-changed – particularly C.J. being locked out of the decision-making process, and exposing her own ignorance in front of the press. There is a lot of story material there, and it is a deep shame it wasn’t picked up and played with.