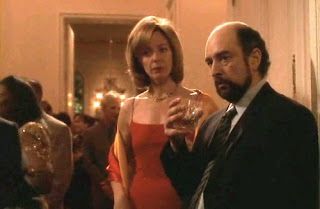 In “20 Hours in L.A.”, the President flies to Los Angeles for a Hollywood fundraiser and to discuss amendments to the Constitution banning burning the American flag. Back in Washington, Leo presses the Vice President to vote in favour of an ethanol tax credit – a credit that Hoynes has always opposed.

For the first time The West Wing stretches its legs, moving out of Washington D.C. for a week and allowing the series to explore some new angles on the American political system. The episode is based around a Democratic Party fundraiser hosted by Hollywood film producer Ted Marcus (Bob Balaban), and it goes a long way to demonstrate how valuable these money-gathering exercises are. Politics is an expensive business, and requires all politicians – even the President of the United States – to do a little negotiation and hand-holding with America’s super-rich.

Bob Balaban plays film producer – and party donor – Ted Marcus. Born in Chicago in 1945, Balaban has been acting in film and television since 1965. His more notable roles have included Captain Orr in Catch-22, David Laughlin in Close Encounters of the Third Kind, Arthur Rosenberg in Altered States, Dr Chandra in 2010, NBC head Russell Dalrymple in Seinfeld, Lloyd Miller in Waiting for Guffman, Richard in Deconstructing Harry, Theodore Millbank III in Best in Show, William Shawn in Capote and Harry Farber in Lady in the Water. As a producer, Balaban is an Oscar nominee (Best Picture) for the film Gosford Park – which he also co-wrote.

Balaban is great here, managing to create a character who is simultaneously thoughtful and impulsive, arrogant and considerate, and aggressive yet conciliatory. More than anything he is believable: he allows us the opportunity to buy into the idea of Ted Marcus being supportive enough to raise millions in campaign funds for the President yet antagonistic enough to dangle those millions as a carrot in the attempt to get what he wants. His final meeting with the President, upstairs during the fundraiser, is nicely played, and demonstrates ably how different Bartlet and Marcus are – and how much they ultimately connect. There is a genuine quality to the way Marcus notes how tired the President seems since he was elected, and an equally genuine reaction from Bartlet.

Of course the party downstairs is where Sorkin is able to have a little fun: taking humorous pot-shots at the way Hollywood works. C.J. gets offered a development deal for reasons she can not understand. We will learn later, in “In the Shadow of Two Gunmen”, that C.J. has more experience in Hollywood than this scene might suggest, but for now it’s amusing enough. Chris Hogan plays Mark Miller, the studio executive who tries to offer C.J. the development deal. In 2006 Hogan was hired by Sorkin and Schlamme to play Hal in the Studio 60 on the Sunset Strip episodes “The Cold Open” and “The West Coast Delay”.

Jay Leno, Veronica Webb and David Hasslehoff all made cameo appearance as themselves during the Los Angeles fundraising party. Hasslehoff is particularly funny, deliberately playing against his public image. Aaron Sorkin ultimately regretted including real-life celebrities, leading him to shy away from allowing too many more of them in the show in the future (although it did continue to happen, usually with real-life musicians such as Yo Yo Ma and James Taylor). ‘Where there is a Jay Leno, Bill Clinton is President of the United States,’ Sorkin explained, ‘and we immediately know that. Moreover, for Leno to do a scene with C.J. Cregg a week after Allison was on Tonight is a strange line that’s a little difficult to pinpoint, but you want to be able to.’(1)

During the party actor Matthew Perry is mentioned but does not appear. This is a little fortunate, since by the end of Season 4 Perry does actually guest star as Associate White House Counsel Joe Quincy. Sadly, however, at no point during his tenure at the White House does anybody seem to remark how much Joe looks like popular comedic actor and star of Friends Matthew Perry.

For the first time we get to see inside Air Force One, after its debut on the runway in “Take This Sabbath Day”. The West Wing uses a standing set, constructed on a Valencia soundstage out of a pre-existing Boeing 747 shell. The set had been used and re-dressed on multiple film and television productions by the time The West Wing started to use it, including the 1997 thriller Turbulence. The West Wing production team used this same Air Force One set for all seven seasons – culminating in the final moments of “Tomorrow”, the series finale.

It’s nice to see Bartlet so happy at being able to order his own plane to take off, admitting it’s one of his favourite parts of the job. When talking about this episode Aaron Sorkin said ‘to a certain extent I like showing the behind-the-scenes, cool stuff.’(2) In many ways Sorkin is right: one of the delights of a series like The West Wing is the fine detail, illuminating all of the aspects of an environment that simply would never occur to the average viewer.

The new episode brings with it a new story arc, personified by Secret Service agent Gina Toscano, played by Jorja Fox. Fox was well known to John Wells after playing the recurring character of Dr Maggie Sawyer on ER. It is revealed here that Zoey Bartlet has been receiving death threats by white supremacists as a result of her dating Charlie Young. This storyline will continue throughout the remainder of the season, and lead directly into the Season 2 premiere, “In the Shadow of Two Gunmen”.

When interviewed about her experience on the series, Fox said: ‘It was amazing. The year was 2000 – there was a presidential election. We had the Democratic National Convention in LA that year, and there was a warm, sort of friendly relationship between the Clinton administration and The West Wing. So we were invited to go every night, we were invited to the White House Correspondents dinner in Clinton's last year. I got to go places and meet people that I would have never been able to meet and I felt so honoured to be part of all that.’(3)

Gina Toscano was intended to be a semi-regular part, and certainly Fox appears throughout the remainder of Season 1, but when Fox was offered a regular lead role in CBS’ new crime drama CSI: Crime Scene Investigation she felt obliged to jump ship. ‘When I left The West Wing,’ she later said, ‘I really thought I’d be back there because I thought that CSI would fall flat on its face. A show about death on a Friday night would never fly – people wouldn’t be interested in it.’(4)

Joey Lucas returns for a second appearance, having worked so well as a comic and romantic foil for Josh in “Take This Sabbath Day”. Here Sorkin takes the opportunity to tweak the character a little: no longer a campaign manager, Joey is now re-positioned as a Democratic Party pollster. It’s a clever move, as it allows for many future opportunities to bring the character back – which they do, for another 15 episodes across all seven seasons.

John de Lancie plays Al Keifer, fellow pollster and – as we discover – Joey’s current romantic partner. Best known to a generation of television viewers as the mischievous Q in Star Trek: The Next Generation, de Lancie has also appeared in Days of our Lives, The Thorn Birds, The Hand That Rocks the Cradle, Mission: Impossible, Legend, Fearless, and Multiplicity.

Back in Washington, Leo attempts to force the Vice President’s hand in breaking a tie in the Senate over a crucial ethanol tax credit. Asides from standing in the wings to assume office in the event of the President’s incapacitation or death, the Vice President’s only major role is to do exactly this: break ties in the Senate. It is the only time he or she is allowed to vote. Hoynes bristles at Leo and the President’s demand, as he has strenuously argued against this exact credit for years. It is interesting that Hoynes is paired once again not with Bartlet but with Leo. It’s one of the series’ more interesting, and more underrated character relationships.

Just as the characters themselves seem excited to make the trip to Los Angeles, so too The West Wing itself seems more engaged by the sudden change of locale. “20 Hours in L.A.” is a nicely played, interesting episode. It capitalises on the change of scene while continuing to develop the story arcs that will shape the rest of the season.