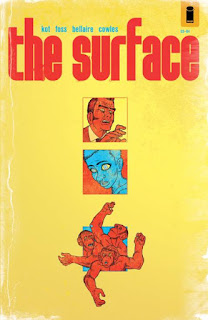 With its third issue Ales Kot's weird, multi-layered science fiction miniseries drops all pretence and proudly goes the full Morrison. Grant Morrison, that is: the influence of Morrison's works on this book is vivid and palpable, and your opinion on his works will largely dictate how much you enjoy what Kot is writing here. I'm not even going to pretend to fully understand what's going on here, but it's intriguing me immensely and feels as if it's all going to slot into place at the end.

That's the trouble with reviewing this kinds of weird, complex storylines. It's very difficult to fully comprehend whether or not you've really enjoyed it until it's done. There's a lot of The Matrix in this, but Kot pushes the idea still further. It's one thing to say that there's another reality beyond your own, but what's reality anyway? What is consciousness? To an extent I'm not certain fully understand the nuance of the story is required at this stage. The characters are well written, the satire and humour is sharp, and Langdon Foss' artwork is great. I also really liked the unexpected prose sections in the book, as well as it's odd and unreliable narrator.

I believe there's one issue to go, but for now The Surface is wonderfully weird and fascinating, and well worth checking out. (4/5)

Mico Suayan's artwork is simply drop-dead gorgeous. It's got an almost film-like photo-realistic quality to it, that makes me suspect that within a year or two Suayan is going to be heralded as the next Bryan Hitch. Jeff Lemire continues to write a great story: on the one hand there's Ray Garrison, the former Bloodshot, working his way from one person to another collecting the nanites that used to give him his powers. On the other hand there's the FBI, tracking down both Ray and the nanite-infected people, who all seem to be engaging in violent spree killings. This is a mature and intelligent science fiction thriller masquerading as a superhero comic. It's also one of the best new titles of 2015. (5/5)

Ivar Timewalker has teamed up with his brothers Armstrong and Gilad to rescue the human scientist Neela Sethi from her future self: it's a time travel story, so don't panic - it always gets convoluted. This is basically Doctor Who, if Doctor Who was ever allowed to include robots saying things like "Will build your toy, or U can remove my fap hand". Fred Van Lente is a natural at this kind of comedy adventure, and Francis Portella's artwork is wonderfully detailed. Andrew Dalhouse's colours really lift the whole book, too. This is what I love about the Valiant line of comics: each book is completely different in tone and content, yet they all share a continuity. This one has rapidly become one of my favourites. (5/5) 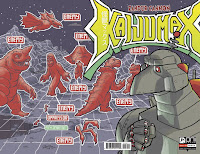 This deliberately absurd riff on Japanese giant monsters and prison movies has been a genuinely pleasant diversion. If free-styling rap lizard-apes and religious cultist giant robots sound like your kind of whimsy, then Kaijumax is almost certainly the comic book for you. Zander Cannon's got a clever way of writing and illustrating the story though, so just when you're not expecting it the book suddenly goes rather dramatic and poignant. It's a clever combination, and a wonderfully enjoyable comic. (4/5)

The two most famous human co-stars in Teenage Mutant Ninja Turtle finally get their own miniseries. Casey and April are driving a van across the USA, following up on an ancient prophecy or some terrible foretold evil. The details, to be honest, aren't relevant. What this issue is, for the most part, is two long-running, well-known comic book characters getting 20-odd pages to actually sit down and have a normal conversation. It's an oddly refreshing read as a result. When TMNT-style shenanigans kick up in the issue's final pages it's almost a disappointment. (3/5)
Posted by Grant at 10:51 PM