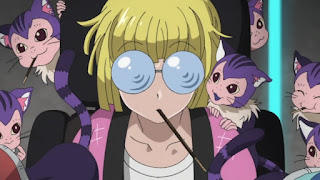 It's been nine months since I last reviewed an episode of Bodacious Space Pirates, a science fiction anime that I liked quite a lot - albeit with a few reservations. It seemed as good a time as any to jump back onboard and sample the series' second half.

A shipment of diseased alien cat-monkeys puts the entire crew of the Bentenmaru out of action and in isolation for weeks. To maintain her license to engage in piracy, Captain Marika is forced to go looking for temporary replacements - and that leads her and Princess Gruyere to an orbiting relay station.

A conversation two weeks ago with friend and fellow blogger John Samuel (whose own anime reviews you should definitely be reading) finally cemented my central problem with Bodacious Space Pirates, and that's the pacing. For the first half of the series I felt as if the storylines were too slow and drawn out, whereas John mentioned he often found them a bit rushed. I think the problem is actually both at the same time.

In short, this series could be a really fast-paced, breezy bit of throwaway entertainment. It's not quite there, however, because it takes 3-5 episodes to do what sometimes feels like it could be done in one. On the other hand, the series could be a well-characterised and beautifully plotted science fiction series with complex protagonists and intricate plotting. It's not quite there either, because it takes 3-5 episodes to tell a story that would need about 12-13. I'm now wondering if the series is essentially caught between two stools: too complex to be simple but too simple to be genuinely complex.

Certainly everything else seems to be done extremely well. The characters are well-defined and likeable, and the design work is visually arresting. The CGI and the cel animation is reasonably well integrated, and the sound design, music and voice acting are all rather pleasant. It's just... damn that weird pacing.

This episode is a pretty funny one on its own merits, as Marika and Gruyere head completely out of their depth in an attempt to hire pirates. Just when it looks as if the story is going in one direction, it swings suddenly into a much more pleasant one - and that twist leads on to a solution to Marika's problems that I was honestly wondering why she hadn't considered in the first place. It all sets up a lot of promise for the next episode.

This is the 14th episode of Bodacious Space Pirates, and by my reckoning it's the 10th good one. That gives the series a quality ratio of 71 per cent.
Posted by Grant at 5:09 PM