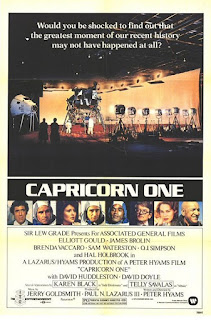 Ever since Armstrong and Aldrin stepped onto the moon's surface there have been mad conspiracy theories - all thoroughly debunked - that the moon landings were faked. It was all a costly sham, claim the tinfoil hat-wearing nutjobs, designed to impress the public and fool the Russians.

Writer/director Peter Hyams was clearly intrigued by these conspiracy theories because in 1977 he made Capricorn One, a conspiracy thriller that uses pretty much that exact premise: NASA has been tasked with sending humans to the planet Mars, they're not able to do it, so to preserve their funding they simple fake it. Three astronauts (played by James Brolin, Sam Waterston and O.J. Simpson) are pulled out of their capsule mere minutes before lift-off, their rocket launches without them, and they're forced to undertake the rest of the mission on a soundstage 200 miles away from where they started. When the capsule finally returns to Earth, it burns up in the Earth's atmosphere. The public believe all three astronauts to be dead, and it's easiest for the conspirators to kill all three rather than admit to their deception.

There is a kernel of a good idea to Capricorn One, but in execution it's a remarkably lazy film. Half of the film tracks the astronauts on a last-ditch trek across the desert to escape being murdered. The other half follows a journalist (played by Elliot Gould) trying to find proof that the Mars landings were faked.

The cast is a good one, including not only Gould, Brolin and Waterston but also the likes of Hal Holbrook, Telly Savalas and Brenda Vaccaro. They're all let down by Hyams' screenplay, in which the dialogue stinks and the narrative doesn't make enough sense. It follows the general direction of proper 1970s conspiracy thrillers without really having an understanding of how or why they work. The result is a rote-learned by-the-numbers exercise that doesn't make a good impression.

It doesn't help that the two main plot threads - astronauts on the run and Gould's investigation - don't intersect for the majority of the film. The result is somewhat like channel-flicking between two equally underwheming movies.

On more than one occasion the film's limited budget can't quite cope with the scenes Hyams has written. What should be a white-knuckle sequence after Gould's journalist discovers his car brakes have been cut turns into an unintentional comedy gag with sped-up footage and a car that doesn't simply fail to stop, but magically accelerates as well.

Capricorn One has potential, but it's a potential that is ultimately unrealised. Peter Hyams went on to direct a number of satisfying commercial films including Outland, Running Scared, Narrow Margin and The Relic. It's a pity his commercial sense and strong sense of story structure failed him here.
Posted by Grant at 5:45 PM