The West Wing: "What Kind of Day Has It Been" 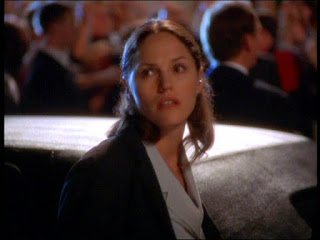 In The West Wing’s first season finale, the President’s preparations for a town hall meeting with Virginian college students is interrupted when a United States fighter jet is shot down in Iraq’s no-fly zone. Toby is concerned when the space shuttle – whose crew includes his payload specialist brother – fails to return to Earth on time, Josh meets with the Vice-President to persuade him to back the President’s agenda on campaign finance reform, and a shocking cliffhanger brings an end to our first year alongside the Bartlet administration.

The episode’s title is identical to the first season finale of Sorkin’s Sports Night, and he re-used it as a small in-joke. ‘There was just something that felt right about doing that,’ Sorkin told an online forum.(1) The title was used a third time for the series finale of Studio 60 on the Sunset Strip, and a fourth time in the series finale of The Newsroom.

It is difficult to think of “What Kind of Day Has It Been” without thinking of its divisive cliffhanger ending, which some viewers loved and others actively hated. For now we shall put the closing moments aside, and focus on the bulk of the episode.


It is an hour littered with nods to the series’ origins. Charlie agrees with what Josh told him all the way back in “A Proportional Response” – the feeling of working for the President doesn’t go away. Early in the episode Charlie and the President walk through a string of rooms and corridors in the White House, with the President greeting staff members as they walk by. The scene reminds us of Leo’s first walk through the West Wing in the series pilot.

The episode has a great focus on Toby. Not only does the episode reveal he has a brother, who is a space shuttle payload specialist, but we also get the distinct impression that he and his brother don’t see eye to eye. Typically for the series, we aren’t told what the issue that separates him from his brother is – there’s simply the strong implication that it’s there. The storyline regarding Toby’s brother and the space shuttle is resolved very well, utilising a nice piece of misdirection regarding Sam’s safe landing gesture which is introduced in the episode’s opening scenes.

Josh meets briefly with Vice-President John Hoynes, to ensure Hoynes supports the President’s campaign finance reform measures. It’s a clever idea to include Tim Matheson in the finale – it helps tie up his character for the season. We’ve seen him bristling for episode after episode over playing second fiddle to Jed Bartlet – here we learn if he’d listened to Josh’s advice during the campaign, he’d be President right now. We need to wait until the Season 2 premiere to learn what that advice was.

Also returning to end the season is John Amos as Admiral Percy Fitzwallace, who is forced to call the President into the situation room when a fighter jet is shot down in the Iraqi no-fly zone. Fitz’s conversation with Bartlet over the Presidential seal on the Oval Office carpet – regarding how the Presidential Seal on the Oval Office carpet is changed if Congress declares war – turns out to have no basis in fact whatsoever. It is an urban myth that the eagle’s head changes direction on the seal when the United States Congress declares war. It actually used to generally face towards the arrows until 1945 when President Harry Truman ordered that it always face the olive branch.

The episode’s dramatic conclusion was something Sorkin had worked out well in advance of writing the script. ‘It was actually the one moment in the entire season that I planned ahead, that wasn’t written on the fly’ he said when talking to the Chicago Sun-Times.(1)

At this stage plans had already been drawn for a two-part premiere for Season 2 that would flashback extensively to show how Bartlet was elected President in the first place. The shootout was simply a strong narrative means to lead into those episodes. Thomas Schlamme agreed with the plan: ‘Our intent was to open a storytelling avenue.’(3) Sorkin was inspired to create the explosive shoot-out after watching Butch Cassidy and the Sundance Kid.

Despite Sorkin’s best intentions the cliffhanger ending did not go down well with television critics, many of whom labelled it a cheap stunt. ‘I promise you,’ Sorkin told the Calgary Sun, ‘that moment in the show happened for the exact same reason every moment on the show happened: I thought people would like it.’(4)

The cast and crew were quick to defend the episode. ‘That was interesting to me that people were upset about that,’ said Bradley Whitford, ‘just because assassination attempts are something that happened three times in my lifetime… somebody has shot at the President.’(5)

John Spencer said ‘it’s not about who’s coming back and who’s not, but a kind of convention that he’s [Sorkin] interested in exploring.’(6)

‘Was I hurt by the bad reviews?’ Sorkin asked the Rocky Mountain News. ‘A little bit. I get upset when I get blasted in a supermarket shopper.’(7)

The episode utilises a common storytelling technique, in that the opening scenes show us what is going to happen, and part of the entertaining of the next 40-odd minutes is seeing how we get there. Lines that don’t quite make sense the first time get explained. Things that we assumed meant one thing the first time later take on a different meaning altogether. The President’s final speech at the town hall meeting is edited for phenomenal effect, delivering a relentless build to the inevitable shoot-out by the President’s motorcade.

The shootout was filmed on location outside the Newseum in . During the shoot a limousine accidentally ran over Jorja Fox’s leg. ‘We were waiting for them to yell cut,’ said Fox, ‘and all of a sudden I feel something heavy on my leg. And there’s this limousine coming off my right leg. I was like, “OK, it’s a new life experience. I’ve been run over by a presidential limousine, which is kind of hilarious.’(8) Despite Fox insisting she was fine the producers had her taken immediately to the nearest hospital, where it was confirmed she had simply suffered a bad contusion. While at the hospital, nurses recognised Fox from ER.

Goodbye Mandy : “What Kind of Day Has It Been” marks the final appearance of Moira Kelly in the series. Sorkin had found it difficult to generate storylines for the character throughout the season, and it was no secret that Kelly wanted out. Rumours have surrounded her departure in subsequent years, but whatever the actual reason for Kelly leaving it had never been publicly disclosed. ‘Moira is a terrific actress,’ said Sorkin – when interviewed by Entertainment Weekly, ‘but we just weren’t the right thing for her. She expressed that she felt the same way, and as a result, storylines hadn’t been invested in that character, because we knew that at the end of the year, we’d be shaking hands and parting company.’(9)

Mandy’s departure is not depicted on screen, and no explanation is ever given for where the character has gone. Furthermore, in the two-part premiere of the second season, “In the Shadow of Two Gunmen”, flashbacks to Bartlet’s Presidential campaign – in which Mandy played an integral part – she is nowhere to be seen and isn’t referenced. The term “Mandyville” has since entered the vernacular of some television fans, a catchphrase like “jump the shark” and “menaced by cougars”, in this case to indicate the place where a character goes when they are written out of a TV show without explanation.

Well into production on the second season, Sorkin was still promising to explain Mandy’s departure from the White House. ‘It’s not going to be something spectacular,’ he told Entertainment Weekly, ‘she didn’t fall down an elevator shaft.’(10)

Some months later in the Boston Herald, Amy Amatangelo asked what half the audience may have been thinking: ‘She’s off the show this season sans explanation. Raise your hand if you even noticed that she was gone.’(11)

“What Kind of Day Has It Been” is a slightly unusual episode, because the strong merits of the episode’s bulk tend to be forgotten in light of the sensationalistic cliffhanger. Seen in isolation the episode seems to utilise a cheap stunt, but considered alongside the two-part follow-up (“In the Shadow of Two Gunmen”) it becomes the first part of a profoundly effective three-act story.

Richard Schiff was so surprised to win that he found himself lost for words on the podium and actually forgot to thank his wife. He returned to the set of The West Wing to find congratulatory notes from his real-life White House counterpart Loretta Ucelli and Steven Spielberg – with whom he had worked on The Lost World: Jurassic Park.

As the episode ends, so does The West Wing’s debut season. It is difficult to think of a more successful first season for an American TV drama. While not every episode has been a masterpiece, the hit-to-miss ratio made it the envy of every other drama in production. More surprising than the success enjoyed here is the discovery that in its second year the series was to get even better – and reach a height of quality American television has failed to equal since. The first season of The West Wing may have finished, but the best is yet to come.