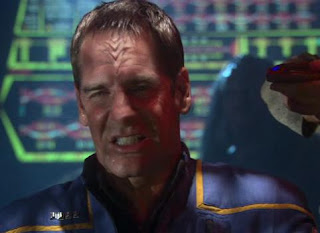 Dr Phlox has been kidnapped by the Klingon Empire to assist them in overcoming a deadly virus that threatens to eradicate their species. The Enterprise has been sabotaged, and is just minutes away from destruction. Lt Reed is caught between two masters, as the demands of Section 31 conflict with the orders of his captain.

I really did not enjoy the first episode of this two-parter, because it struck me as the absolute worst in continuity-heavy fan-centric rubbish that the Star Trek franchise had to offer. All of those continuity elements continue through "Divergence", whether it's the explanation of why the Klingons had bumpy heads in The Next Generation but smooth heads in the original Star Trek, or the manner in which DNA from Khan Noonien Singh's genetically modified humans played a part, or the reintroduction of Deep Space Nine's Section 31. Some aspects of this episode are much more entertaining than the first part of the story. Other aspects simply remain as bad. All things considered, this is pretty terrible television.

Things commence on a positive note: the Enterprise has been sabotaged, it's trapped at ever-increasing warp speeds, and the only way to save the ship is for Commander Tucker to get from the sister-ship Columbia to the Enterprise via open space at warp speed, shut down the Enterprise's engines in mid-warp and hope it will be held inside Columbia's warp field long enough for the engines to cold-start while flying at millions of miles an hour. It's a great sequence, and a neat method of getting the recently departed Tucker back into the story.

Aside from that, there's a lot of fussing around Phlox's attempts to find a cure, and to prevent the Klingons from developing genetically engineered super-soldiers at the same time. There's some fairly strained material about Reed having to choose which commander to follow - Archer or Section 31's Harris. There's an absolutely torturous conclusion, explaining how the smooth-headed Klingons will look that way for generations - as will their children - but that therapies and surgeries will be developed to enable them to have bumpy heads in time for Star Trek: The Motion Picture.

We didn't need the explanation. We really didn't. Anybody asking for an explanation was not worth listening to. Anybody in the writer's room begging to develop an on-screen explanation didn't need to be on the payroll. This is all just stuff and nonsense, playing to a rapidly diminishing audience while the mainstream crowd scratched their heads and changed the channel.

We're now 16 episodes into the season. Precisely half of them have been good.
Posted by Grant at 5:08 PM