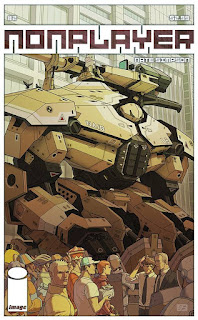 All the way back in 2011, Nate Simpson made a huge impact with the first issue of Nonplayer, a science fiction comic book in which a massively-multiplayer online game had become the predominant cultural phenomenon in the world, and where the artificial intelligences within that game appeared to be growing self-aware. It was a genuinely clever science fiction story, but what readers - including myself - seemed to really respond to was the artwork. It was beautifully composed and coloured, rich in intricate detail but incredible easy to read at the same time. The issue sold out through three separate printings, and Simpson even got a Hollywood deal out of that single first issue.

It's now four years later, and Nonplayer #2 has finally been released into comic shops. Talk about delays in your schedule.

This issue expands the story considerably, devoting much of its time to a police siege to stop a runaway AI inside a giant robot, and introducing the arrogant, ultra-rich creator of the game that's central to the narrative. It's great stuff, although it understandably left me straining to remember what happened in the last issue four years earlier. There's also a strong debt owed to Mamoru Oshii here, but that's no bad thing.

The artwork remains astonishing, and providing Simpson can stick to a regular schedule this time Nonplayer could become something really special. (5/5)

Under the cut: reviews of Darth Vader, Edward Scissorhands, The Omega Men, The Wicked + the Divine and Winterworld: Frozen Fleet.

After what struck me as a fairly silly development in issue #5, Darth Vader recovers quickly with a tremendously strong issue that showcases two really impressive things. Firstly, events in the main Star Wars comic cross over neatly into this title. If, like me, you're only reading one book while vaguely keeping tabs on the other, it's a smooth and uninterrupted read. If you're reading both books, they show off a tight shared continuity that matches what Marvel does best with all of the brilliant characters and settings of the Star Wars universe. Secondly, the news Vader receives at the end of this first story arc leads to a moment that we've all assumed must have happened, but now we actually get to see it. Gillen and Larocca present it perfectly. (5/5)

Edward and his host family head out on a cross-country road trip to meet Dr April Wells, the TV plastic surgeon who may be able to give Edward a normal life. This really is a strange book, in that it's an ongoing sequel to a film that - while brilliant in my opinion - did not really leave itself open to any sort of continuation. That in mind, this is surprisingly entertaining stuff. It's fairly cartoony, with Drew Rausch providing very exaggerated artwork, and Kate Leth's script bouncing along in an amiable fashion. It's a wholly unnecessary book, but if you loved the movie and want to see more of the character it does a pretty good job. (3/5)

The Omega Men is a science fiction comic set in the DC Universe. It's based on an earlier title by Marv Wolfman and Joe Staton, which I have never read and to be honest had never even heard of. Coming in cold, then, this book really impressed me. The artwork by Barnaby Bagenda and Jose Marzan Jr is beautiful, subtly coloured and beautifully framed in neat nine-panel grids. The story features a solid opening hook: On the planet Abataern, security forces are moving in on a group of terrorists known as the Omega Men - who have just murdered the Green Lantern Kyle Rayner. There's not enough to really give a perfect sense of how this book's going to progress, but as an opener it's gripping, entertaining and absolutely has me keen to read what happens next. (5/5)

The second story arc concludes in the most surprising of fashions. I honestly can't write much about what happens in this issue, because everything worth talking about would spoil it for readers. Suffice to say some things happen that I expected, some things happen that I did not expect, and I am extremely curious to see where this brilliant comic book goes with the third arc next month. As always, McKelvie and Wilson's artwork is pretty much flawless: I'm not sure there's an artist drawing today whose work I admire as much as McKelvie's. (5/5)

Frozen Fleet takes a wonderfully odd right turn with its second issue. After being fired upon by an iced-in ship, Scully and Wynn are welcomed with open arms. Wynn in particular is welcome, with the insane crew assuming her to be their replacement captain. There's a really distinctive and entertaining tone to this whole issue that I really didn't expect. The dramatic beats are all still there, but the humour came as a real surprise. This is shaping up to be a neat little miniseries. (3/5)
Posted by Grant at 7:33 PM