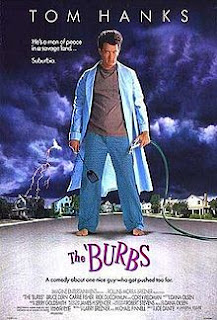 In a quiet suburban cul-de-sac, Ray Peterson (Tom Hanks) decides to spend his vacation time relaxing at home, He's immediately suspicious of his new neighbours, the mysterious Klopeks. The more he looks into them, the more suspicious he gets until he and his friends are suspecting them of murder.

The 'Burbs is a satirical comedy written by Dana Olsen and directed by Joe Dante. It was released in 1989, pretty close to the point where Tom Hanks stopped making comedies and started making award-winning dramas instead. Broadly speaking it's a clever little film, scraping away at the veneer of suburban American life and showing off its residents as petty, hostile, untrustworthy and bigoted.

As far as Tom Hanks movies go, it's unexpectedly dark and twisted. By Joe Dante's own standards it seems pretty messed-up. He may have directed relatively dark films before, including Gremlins and The Howling, but the satire never seemed as sharp as it is here.

Hanks is great, but then he was always able to make comedy seem effortless. He's got a great supporting cast as well, including Bruce Dern, Carrie Fisher and Rick Ducommun. Even teen star Corey Feldman is pretty solid, in what was pretty much his final high profile role. The cast all do a good job playing immediately recognisable archetypes, who then engage in increasingly poor behaviour.

It's a gradual thing too, slowly pushing the characters from harmless curiosity to invasive nosiness to breaking and entering. It's all done smoothly enough that you go with them for quite a long while before realising just how far out of line they've travelled.

It's only in the film's climax that it all falls apart. Had the film ended with the Klopeks exonerated, and a badly injured Ray ranting in the street at his community's gross paranoia before being taken away by the police, it would have been a stunning indictment on American superficiality and paranoia. Instead the scene suddenly flexes in the other direction, giving it an unconvincing and unsatisfying traditional ending. It also has the unintended consequence of rewarding the characters' awful behaviour. I have been informed this was the result of a studio-mandated reshoot. It certainly feels that way. It's what stops the film from being a fully brilliant piece of work. I can't imagine how angry it must have made Joe Dante. I was angry and I was only watching the thing.

The 1950s small town vibe feels much more pronounced than in Dante's earlier films, although he's always had a tendency to play in that area. In this case it's pronounced to the point of parody, feeling less like Dante's own films and more like the off-kilter communities of Tim Burton's Beetlejuice or Edward Scissorhands.

Climax aside, this is a marvellous film and very much underrated. Universal Pictures made a real misstep in cutting off the climax at the knees. What is left is entertaining enough, but badly compromised.
Posted by Grant at 5:09 PM