Ga-Rei-Zero: "The Times of a Chance Encounter" 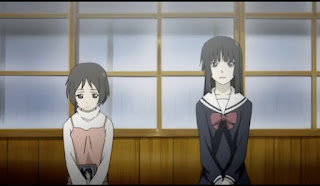 So to recap: episode 1 of Ga-Rei-Zero introduced a crack team of demon-hunting government agents, all of whom were unexpectedly and brutally massacred at the end by a sword-wielding young woman in a school uniform named Yomi Isayama. Episode 2 introduced an entirely new team of agents sent to follow up on the first, including their own sword-wielding schoolgirl named Kagura Tsuchimiya, and this team too seemed set to be slaughtered by the mysterious Yomi. Talk about making things difficult for your audience: who am I supposed to be following? What's actually going on? I'd forgive 10 minutes of in media res action, but two whole episodes?

Episode 3 sort of makes things easier and sort of makes them harder. I was expecting a return to Yomi's fight against Kagura, that appeared to end in Kagura being murdered. Instead the series jumps back a few years, to showcase the two women's first meeting. It makes their relationship in episode 2 a little more understandable, but certainly hasn't made the series much easier to follow.

So what do we learn? Kagura (the good swordswoman) is the daughter of a powerful demon-fighting martial artist. Her mother has died - killed by a mysterious white-haired boy surrounded by blue butterflies - something we glimpsed without explanation back in episode 1. At a young age, and effectively orphaned, Kagura is taken into the care of the Isayama family. She meets and befriends the family's daughter, Yomi, who is a little bit older and is secretly a member of the Supernatural Disaster Countermeasures Division. Kagura joins Yomi on a mission and meets the team - the team of which she herself will later be a member, and the team that Yomi will start to massacre in episode 2.

This all feels like tremendously hard work. I'm all for a series with secrets, but Ga-Rei-Zero obfuscates secrets with non-linear story-telling on top of constantly shifting protagonists. It's difficult to get a bead on anything that's going on. On its own merits this episode is actually quite entertaining, and certainly a lot more engaging and sensible than the first two. It has a completely different tone as well, feeling much more meditative and thoughtful. Even the colour scheme is more subtle and interesting.

It's impossible to tell for sure without seeing the rest of the series, but it feels like you can actually start watching here and get back to episodes 1 and 2 later. I'm giving this one the thumbs-up, and that finally gives Ga-Rei-Zero a tick of approval. Three episodes in, and the quality ratio finally breaks up from zero: even if it is just 33 per cent.
Posted by Grant at 10:05 PM