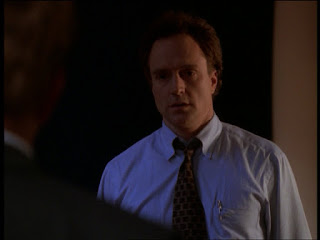 In “Enemies”: Danny Concannon chases a story that the President gave the Vice President a dressing down in a cabinet meeting, a last minute rider threatens to kill an important banking bill, and Leo’s daughter Mallory asks Sam out to the opera.

Aaron Sorkin’s lateness with scripts was apparent pretty much as soon as production on The West Wing began. He was, at the time, writing or co-writing every episode of both The West Wing and Sports Night, and with his late scripts came late call-outs for actors, late shoots and large cost over-runs. As Sorkin noted to Charlie Rose in 2003: ‘'Out of the 88 episodes I did, we were on time at at budget... never. Not once.’(1)

Eventually something was going to give way, and it gave way here: eight episodes in The West Wing has its first episode written without Sorkin’s involvement. In the first four seasons of the series, only two other episodes would be written without the show’s creator: “Swiss Diplomacy” and “The Long Goodbye”.

It took five writers in total to replace Sorkin: Ron Osborn and Jeff Reno were credited with the teleplay, and Rick Cleveland, Lawrence O’Donnell and Patrick Caddell were credited with the story. Speaking on a TV Guide-sponsored online chat, Dulé Hill said ‘we never got a complete script until after the taping was over. The actual show came out pretty good though. It was the episode where Rob's character had to write a birthday greeting from the President to the assistant agricultural secretary. For me, the episode was fun. It was different.’(2)

There is an immediate temptation, when viewing the first episode not penned by Sorkin, to point to lots of little ways in which the episode feels different. The problem is: much as one might try to resist the temptation and simply enjoy the episode on its own merits, the writing actually does feel a little bit off. There is a change of tone evident in “Enemies”. The lighter moments – and this is, in general, a very light-hearted script – feel a bit like a cartoon. The dramatic parts felt more than a little melodramatic.

Five writers – but who are they? Ron Osborn and Jeff Reno contribute the actual teleplay. They were consulting producers on The West Wing from “Post Hoc, Ergo Propter Hoc” to “In Excelsis Deo”. “Enemies” is their only writing credit for the series. They had first worked as writers on Mork & Mindy in 1980 before writing for Too Close for Comfort (1982), Silver Spoons (1983), Goodnight Beantown (1983), Night Court (1984-85) and Moonlighting (1985-88). Together they wrote the 1998 film Meet Joe Black as well as re-wrote the 1994 comedy Radioland Murders. From 1994 to 1997 they were writers and executive producers on the animated comedy Duckman. In 1994 they were two of the thirty-two credited writers of the live-action Flintstones movie.

The story was developed by Rick Cleveland, and then Lawrence O’Donnell Jr. and Patrick Caddell working in partnership. Cleveland’s tenure on The West Wing we will get to when we look at “In Excelsis Deo”. O’Donnell and Caddell's backgrounds are described in  “Five Votes Down”.

The episode is titled “Enemies”, and the adversarial relationship at its core is the one between President Bartlet and Vice President Hoynes. The antagonism that was introduced in “Five Votes Down” is brought to the forefront here, with Bartlet and Hoynes finally sharing a scene together. They ran against each other in the Democratic Parties, and almost two years later one man remains bitter as hell that he didn’t get to run for President and the other remains better as hell because he had to beg to get his Vice President. I'm not certain how realistic the antagonism between the two men is, but it definitely generates solid drama. It’s not for nothing that Hoynes appears throughout all seven seasons of the series – he is one of the few guest artists to do so.

Leo’s daughter Mallory returns to flirt with Sam. The series runs through an odd process with Sam during the first season. He has two main running arcs, both romantic, one involving Mallory and the other involving Laurie. It’s the Laurie-based arc that is the dramatically satisfying one: it’s more serious, and there’s a lot more at stake – both for Sam and for the Bartlet administration. Episodes where he spars with Mallory lack the same kind of strength and power. They’re amusing enough, in a sort of light, playful fashion, but they’re quite simply not as strong.

‘We talk about enemies more than we use to,’ says Josh in the episode’s closing moments. What is interesting is that in an episode titled “Enemies” we haven’t really encountered too many of them. Certainly the ones we have encountered are all basically on the same side.

The episode was directed by Alan Taylor, who returned later in the first season to direct “20 Hours in L.A.”. An accomplished television director, Taylor has also helmed episodes of Oz, Homicide: Life on the Street, Six Feet Under, The Sopranos, Rome, Sex and the City and Deadwood. More recently he has been one of the main directors of HBO's Game of Thrones. Taylor has also directed a number of feature films including Palookaville, The Emperor’s New Clothes (which he also wrote), Thor: The Dark World and Terminator Genisys.

“Enemies” actually wound up inspiring real-life politics, when New York Congresswoman Carolyn Maloney asked President Clinton to preserve Governor’s Island by declaring two of its forts national monuments. Maloney openly admitted that seeing the gambit in action on The West Wing inspired her to try it in real life.