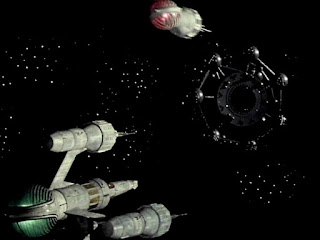 When we last saw Blake and his crew, they had just stolen the super-computer Orac. As a demonstration of its powers, Orac shows a prediction on their scanner screen: the Liberator will be destroyed. Soon this prediction is the last of Blake's worries as the Liberator is attacked by two unknown spacecraft, and its entire systems are taken over by an outside force.

"Redemption" is a very strong and entertaining season opener, combining action, drama and the now-familiar biting dialogue and finally answering one of the lingering questions left over from Season 1. When Blake took control of the Liberator, it was an abandoned alien ship floating in space. "Redemption" doesn't simply answer the question of who built the Liberator - the original owners have returned to take back their rightful property.

As with the later episodes of Season 1, Terry Nation has broken his script into two separate sections. In the first, the Liberator comes under attack and then alien control. Any attempts to repair the ship or re-take control of it are met with a very hostile automated defence. By and large it's a wonderfully tense series of scenes, and the crew gradually realise just how helpless they are. It's not perfect - a scene of Blake and Avon trying to escape an animated power cable is a bit silly - but overall it's very effective.

In the second half Blake's crew are captured by the System: an alien civilization controlled by a massive computer network. Given the restraints of the series' budget, it's all done very well. In many respects this is an episode that's wilfully bitten off more than it can chew, with just 20 minutes and a limited amount of money put aside to showcase an entire alien race, a massive space station and multiple Liberator-like space vessels. To an extent that's one of the reasons why I've always liked this series; it never let budgets get in the way of a big idea, no matter what the visual drawbacks that resulted. An entire slave revolt is expressed with just one actor, for example.

As far as division of labour is concerned, Avon, Blake and Jenna get the bulk of the episode's attention. Vila and Gan get a little bit of material, and it's Cally who's left out in the cold. The series does seem to be juggling one too many actors at this stage - a problem they bluntly rectify in a few episodes' time.

While this episode retains a familiar production team - producer David Maloney, director Vere Lorrimer, writer Terry Nation and script editor Chris Boucher - it does add new costume designer June Hudson. Her overt sense of theatricality in her designs lead to some of the most bizarre costume choices in the history of science fiction television. When science fiction fans remember the costumes of Blake's 7, usually with either fondness or derision, it's Hudson's work that they're remembering.

The episode's climax manages to neatly resolve Orac's prediction. The prediction was always remarkably silly. An early conversation between Blake and Avon attempts to rationalise how Orac could make such an accurate prophecy, but the logic clearly doesn't stretch to the extent of the computer predicting the events that occur here. Once resolved, the prediction is quickly left behind and Orac notably never gets asked to predict anything for the rest of the series.

This is a great season premiere. I remember seeing this for the first time as a child and finding it an epic and frightening adventure. It's certainly not an epic when I watch it now, nor is it remotely frightening, but it still entertains me a hell of a lot. Season 2 is off to a great start.
Posted by Grant at 4:43 PM