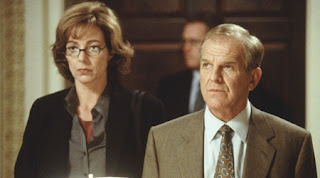 In “Mr Willis of Ohio”: Toby and Mandy must sell an important commerce bill to a group of congressman – including Mr Joe Willis of Ohio, who has assumed his late wife’s office, C.J. needs Sam to explain the census to her, and President Bartlet learns that Leo’s wife has left him.

Former White House press secretary Joe Lockhart was a big fan of the episode: ‘They did a program where a third of the episode involved a recurring story line, and it was the debate on census and statistical sampling. And they did a better job of framing the issue, the politics on each side, and the passions on each side, than anybody in the broadcast world did throughout this debate.’(1)

‘I thought Aaron was crazy,’ said Allison Janney, ‘I read that, and I was like, “Well this is going to be the most boring thing ever.” And then as we did it, we had such a good time, and I learned, right along with C.J., as did my friends who watched the show. And now I can guarantee you everyone who saw the show is going to fill out their census because they saw how, and they learned how, important it actually was and what it means.’(2)

Richard Schiff said: ‘That Aaron can make things like the census as fascinating as he does on the show is a benefit for anyone who watches.’(3)

In something that ultimately became quite a signature technique for the series, “Mr Willis of Ohio” educated its audience on the issues regarding the census by couching it within characters. ‘You’re involved with the fact that Sam is the smarter one and C.J. has to be the student at this moment,’ explained Thomas Schlamme, ‘so you’re enjoying that first and foremost. From a directing point of view, the essence of the scene is not about teaching us about the census, it’s about how are these two people going to end up being closer to one another by the end of this episode. So if you start from that, then you can lay on… any dialogue you want, and it’s fascinating.’(4)

Joe Willis, the Ohio school teacher who assumed his wife’s office when she died, was played by Al Fann. Born in Ohio himself, he operated the noted Al Fann Theatrical Ensemble in Harlem during the 1970s. Fann first appeared in cinemas as Billie Boy in the 1970 film Cotton Comes to Harlem. He later appeared in The French Connection (1971), The Super Cops (1974), Crossroads (1986), The Fisher King (1991) and Frankie and Johnny (1991), not to mention a raft of television comedies and dramas.

Joe Willis’ fellow congressmen were played by Charley Lang (Skinner) and Kenneth Tigar (Gladman). Charley Lang returned twice to the role of Congressman Matt Skinner, in “Enemies” and “The Portland Trip”. Lang made his Broadway debut in 1978, playing Young Charlie in the Tony Award-winning production of Da. He had previously made guest appearances on L.A. Law, Murphy Brown, Alien Nation, Tour of Duty, Matlock and Murder, She Wrote. When not acting he works as a licensed psychotherapist. Lang largely retired from acting shortly after his appearances on The West Wing, and now teaches psychology at Antioch University, Los Angeles. Looking back on the role, Lang said ‘I’d have to say that in my 20 year career as an actor, that is probably the role for which I am most frequently recognized.’(5)

Kenneth Tigar only appears once as Congressman Gladman. Tigar had previously appeared in episodes of countless television series and films, including The Waltons, Man From Atlantis, Charlie’s Angels, Barney Miller (as Mr Kopeckne), Knight Rider, Cheers, Dallas, Star Trek: The Next Generation, ER and The X Files.

“Mr Willis of Ohio” sees the first appearance of Michael O’Neill as Secret Service Agent Ron Butterfield, who heads up the President’s security detail. O’Neill returns in another 15 episodes across all seven seasons – including in the series finale “Tomorrow”. O’Neill had previously appeared in Jennifer Eight (1992), Lorenzo’s Oil (1992), Bushwhacked (1995), The Sunchaser (1996), The Shining miniseries (1997), The Mod Squad (1999), Roswell (1999) and Chicago Hope.

O’Neill’s performance as the to-the-point Agent Butterfield added a valuable extra layer to the series, always maintaining composure under every circumstance – including getting shot in the hand in “In the Shadow of Two Gunmen: Part 1”. In 2004 O’Neill was profiled by the Los Angeles Times as an example of many actors in the American film and television industry who – despite visible talent and lengthy resumes, continue to struggle to earn enough money to support themselves and their families. ‘The men I went to college with, they’re all doctors or lawyers or engineers,’ said O’Neill, ‘and they think I’m the successful one. And maybe I am, because I did do this thing, this incredibly strange and sometimes beautiful thing, which was follow a dream.’(6)

Looking back on the series in 2006, Bradley Whitford remembered that O’Neill ‘just came on with such conviction. He was just using all of himself from the first day he walked in and briefed the president on security. You were like, “This guy has a heart and a home, and this guy’s for real.”'(7)

As for other actors appearing in the episode, keep an eye out for the frat boys in the bar who start to hassle Zoey. The third (and uncredited) member of the group is Eric Balfour, who later played computer analyst Milo Pressman in 24 Seasons 1 and 6. He also played Gabriel Dimas in Six Feet Under (2001-2003) Calvin Banks in Veritas: The Quest (2003) and A.D.A. Brian Peluso in Conviction (2006).

“Mr Willis of Ohio” was the first episode of The West Wing directed by Christopher Misiano. Misiano (co-incidentally, and by the by, a childhood friend of comedian Jerry Seinfeld) received his first break as a camera operator on the long-running crime drama Law & Order. He continued to work as a cinematographer and then director for that series, as well as for such dramas as Nash Bridges, Brooklyn South and ER. Misiano would ultimately become one of the key directors on The West Wing, directing 35 episodes including “Isaac and Ishmael”, “Night Five”, “24 Hours in America”, “Shutdown”, “Memorial Day” and “Tomorrow”. He won the 2003 Emmy Award for Outstanding Directing for a Drama Series, for the Season 4 finale “Twenty Five”.

In addition to his work as a director, Misiano has also become an active television producer. From 2000 to 2001 he was a producer on ER. In mid-2001 he jumped ship to be a supervising producer on The West Wing’s third season. For the fourth and fifth seasons he worked as co-executive producer, before being promoted to full executive producer through to the series finale. Following the conclusion of The West Wing, Misiano was executive producer on the legal drama Eli Stone, and directed episodes of Fringe, Friday Night Lights, Heroes and Trauma.

The episode opens with the first of the White House late night poker games. It’s an interesting scene, because as with the conclusion of “The Crackpots and These Women” it shows the main cast in a more relaxed, social environment. Jed Bartlet’s reputation as a trivia-obsessed academic is built. Finally the scene is brought to a dramatic conclusion by a security lockdown by members of the US Secret Service. The harsher realities of working for the President are brought to the fore for the very first time. The introduction of the Secret Service to the series, particularly the character of Butterfield, opens the series up to concerns about Presidential security – not just for the President himself, but also his staff and particularly his own family. Bartlet’s tirade at Zoey at the episode’s climax is emotive stuff, and an argument that the series will return to further down the line.

The West Wing’s poker scenes ultimately led to one of the odder spin-offs related to a TV drama: on 9 December 2003 five members of the cast (Sheen, Janney, Spencer, Schiff and Timothy Busfield) appeared on the Bravo reality TV series Celebrity Poker Showdown, playing each other at Texas Hold’Em poker.