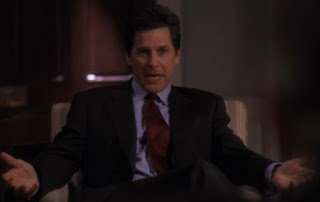 In The West Wing’s second episode: Sam admits to Josh and Toby that he accidentally slept with a prostitute, C.J. struggles to challenge the Vice-President over comments to the press, Mandy loses one client only to get a better one, and President Bartlet appoints a new President’s Physician – only to get some very bad news.

Most television dramas suffer a small drop in quality from their first episode to their second, and that trend is certainly apparent in “Post Hoc, Ergo Propter Hoc” (the title, explained in the episode, is Latin for “after, therefore because of it”). The cause of this is essentially structural: while the pilot introduced the characters and acted as a relatively self-contained story, the second episode is devoted to opening the series up and introducing some continuing plot strands.

The chief storylines introduced here include Mandy’s integration into the White House staff, tensions between the President and the Vice-President, and Sam’s continued concern over Laurie – the call girl he accidentally slept with in the pilot. The episode also ends on a dramatic cliffhanger – essentially this and the subsequent episode, “A Proportional Response”, may be seen as a two-parter.

“Post Hoc, Ergo Propter Hoc” features the first appearance of Vice-President John Hoynes, played by Tim Matheson. Born in Glendale, California, in 1947, Matheson started out as a child actor, featuring in the CBS comedy Window on Main Street from 1961-62. In 1964 he voiced the title role of the cartoon Jonny Quest. Matheson acted consistently through adolescence into adulthood, guest starring in a range of popular television programmes including Bonanza, The Magician, Ironhide, Here’s Lucy and Night Gallery. In 1978 he played Eric Stratton in the breakout hit film Animal House, which led to roles in 1941 and Fletch.

Matheson would ultimately feature in 19 episodes of The West Wing, across all seven seasons. In 2009 he described the series as 'the finest group of actors, the best directors, the best writers… as good as any that I've ever worked with." He also noted 'it was extremely difficult to do, because they were so demanding about the dialogue. You had to say it exactly as written, to the punctuation. And if you didn’t, you’d do it again. But it was so worthwhile.'(1)

Tim Matheson brings a wonderful, quite cynical edge to John Hoynes. Right from the get-go he establishes the character as driven, egocentric and fairly antagonistic. Matheson would later explain that Aaron Sorkin based the Bartlet-Hoynes relationship on that of John F. Kennedy and Lyndon B. Johnson. ‘Johnson had a bit of an outsized ego and Kennedy had his group of intellectuals, and they were just different. Johnson didn't feel he was being utilized enough; I think Hoynes feels the same way. He was the majority leader of the Senate and like all senators, he feels he could be president and should be!’(2)

Ruben Santiago-Hudson played the pivotal role of Lieutenant Morris Tolliver, the naval doctor assigned to become the President’s personal physician. The character made a comparatively brief appearance, meaning that Santiago-Hudson was required to make a strong impact as quickly as possible for the episode’s dénouement to work. Thankfully he is exceptional, giving Tolliver a humour and warmth that lingers in the memory long after the character has gone. Of Puerto Rican and African American descent, Ruben Santiago-Hudson (born Ruben Santiago Jr.) is best known for his broadly acclaimed one-man show Lackawanna Blues, in which he portrays more than 20 different characters while playing a range of music. In 1996 he was awarded Broadway’s Tony Award for Best Actor in August Wilson’s Seven Guitars. More recently he has played Captain Roy Montgomery in the mystery series Castle.

Merrin Dungey played Daisy, Mandy’s assistant. Dungey had been cast in small parts in a number of popular TV series prior to The West Wing, including episodes of Babylon 5, Caroline in the City, ER, Murphy Brown and Seinfeld. She also played the role of Sheila Bradley in Deep Impact (which also featured Richard Schiff) and Ms Seaver in Edtv. In 1996 she played Wanda in the short-lived sitcom Party Girl (and by short, I mean short: it was cancelled after four episodes).

The role of Daisy was written as a recurring character, giving Mandy an assistant much like Josh had Donna and Leo had Margaret. Despite the best of intentions, Daisy never appeared in The West Wing again. “I was supposed to recur,’ Dungey said, ‘but after Moira got the job at the White House, I somehow disappeared. I’m lost in the halls of the West Wing somewhere.’(3)

John Bedford Lloyd makes his one appearance in The West Wing as Senator Lloyd Russell, discussing in the pilot but not seen until the episode’s opening scene. Lloyd had previously appeared in Trading Places, Hometown, The Abyss, Philadelphia and Fair Game.

There’s an odd sense that Aaron Sorkin has made an unanticipated right turn with Mandy’s storyline. In the pilot she is set up as a rival to the staff at the West Wing, and by the end of this episode she is fully incorporated with the main cast. Her assistant Daisy is introduced just in time to never be seen again, and for all the build-up in the pilot Lloyd Russell’s storyline ends before the opening credits have rolled. Given that the original pitch for The West Wing was to focus on the staffers such as Sam and Josh, and not on the President, it’s possible that Mandy – who was intended as a comic and romantic foil for Josh – wound up surplus to requirements.

The problem certainly isn’t helped by Bradley Whitford’s electric chemistry with Janel Maloney as Donna, which is even more apparent here than in the pilot. We’re only two episodes in and already it feels like Mandy has nowhere in the series to go. It’s interesting to note that, although “Post Hoc, Ergo Propter Hoc” is set roughly one week after the pilot, Mandy’s hair has grown considerably. Moira Kelly’s hairstyle was changed after the network found it too severe in the first episode.

Some other recurring faces pop up for the first time. Victor Love makes the first of four appearances in the Washington Press Corps as Mike – like most of the journalists featured in the press gaggle he fails to get a last name. Love returns in “A Proportional Response”, “Five Votes Down” and “Celestial Navigation”.

Andy Umberger plays Stevie, Chief of Staff to John Hoynes. The character returns briefly in the fourth season episode “Life on Mars”. In the meantime, Umberger appears in the second season premiere, “In the Shadow of Two Gunmen: Part 1”, playing another character named Cal Mathis.

Robyn Pedretti plays Candy, a Vice-Presidential aide. She is seen again in “Enemies”, “In the Shadow of Two Gunmen: Part 1” and “The Stackhouse Filibuster”.

Bradley James makes the first of thirteen appearances in the series as Secret Service Agent Donnie. His final appearance is in the seventh season episode “Here Today”. James has played small roles in a number of TV series including Charmed, Boomtown, CSI, The Shield and CSI: Miami.

With “Post Hoc, Ergo Propter Hoc” Aaron Sorkin started the lengthy task of filling out Jed Bartlet’s back story, something that he hadn’t worked out before the series started. We learn via Josh that Bartlet is a three-term congressman, a two-term governor and a Nobel laureate (which we will learn down the track is for economics). ‘That’s not something I jot down on a legal pad,’ he told the St Petersburg Times, ‘It comes up naturally as you explore the episodes.’(4) This spontaneity in developing characters and their back stories is a common occurrence for Sorkin: it’s not enough that he writes the best dialogue in American film and television – he also manages to make up the story as he goes along.

Rob Lowe objected to the storyline in which Sam continues to pursue Laurie in an attempt to somehow reform her. The entire arc, based on Sam sleeping with a prostitute, inspired memories of Lowe’s own real-life sex scandal in which he was videotaped having sex with two women, one of whom was (without his knowledge) under-age. Despite Lowe’s concerns, and mainly because the arc had already been set in motion in the completed pilot, the storyline remained.

Aaron Sorkin missed the first day of shooting of this episode in order to meet with executives from NBC. Despite positive test screenings of the pilot, NBC was concerned that the harsh reprimand Bartlet gave the religious right at the episode’s end might be a continuing trend. A political drama on television was one thing, but an actively leftist one would be considered unacceptable. An agreement was reached to try and show both sides of the political argument wherever possible. During his absence, Sorkin paid for a three-part mariachi band to serenade the cast and crew on their return to set from lunch. By the time he’d returned to set two hours later he had spontaneously rewritten the meeting in Leo’s office. With the actors struggling to learn all-new lines, the scene took five hours to shoot. ‘Is it too late for me to get back into features?’ Rob Lowe was heard to ask. ‘This is breaking my balls.’(5)

The West Wing’s main theme makes its debut here. The version heard is an electronic rendition, performed by W.G. Snuffy Walden prior to the first orchestra recording session. It is replaced by the final version a few episodes into the season.

Despite a mostly light-hearted tone for the bulk of the episode, Sorkin deliberately chooses to shock his audience with a sudden right-turn into harsh drama. A plane has been shot down by the Syrian military, and Morris Tolliver is dead. ‘Leo,’ says Bartlet, ‘I’m not afraid. I’m going to blow them off the face of the Earth with the fury of God’s own thunder.’ From the look in Martin Sheen’s eyes, terrifyingly, we believe him.